How to Render Lard

Seriously!?!  Yes, Seriously.  We do this once a year.  Every year, around Fair time, we order pork and beef from the butcher.  This includes the lard.  To make it usable, it needs to be rendered. 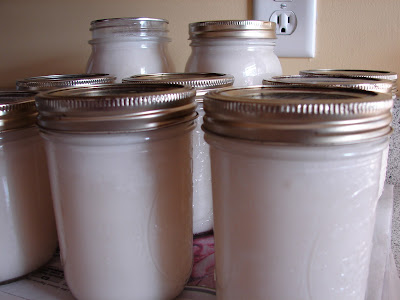 Before you get totally grossed out by the idea of cooking with lard, let me point out a couple of things.
Do you know why McDonald's had the best French Fries?  Lard (until the vegetarians demanded they change to veg oil)

All animal fat has 9 calories per gram. Lard has .4g of saturated fat and 1mg of cholesterol.  Because it is natural, there are no trans-fats in lard.

Vegetable Shortening (Crisco) also has 9 calories of fat per gram.  .3g of that is saturated fat. 0mg cholesterol.    Not much difference.

Butter is only 7 calories per gram, but .5g is saturated fat and 2 mg of cholesterol.

Lard is great for frying because it has a high smoke point.  (We really only deep fry a couple of times a year, though)

Mostly we use it in baking powder biscuits and pie crust.  I usually do half butter and half lard.  I don't recommend licking the spoon.  Whatever flavor lard has cooks away, but it's not great 'raw'.

I have also made soap from lard.  I can talk about that on another post, sometime.

Wikipedia has a great article on lard here, if you want to read more.

A funny story about lard.  My father-in-law used to talk about eating lard and sugar sandwiches when he was a kid.  So the first year we rendered, we made one for him.   He took one bite.  He didn't finish it.  We have some great pictures of the event (somewhere).


So you start with your lard from the butcher.  Hopefully they ground it for you.  Put in a large pot with some water and cook for a long time.  We do this outside on a gas grill with a burner. 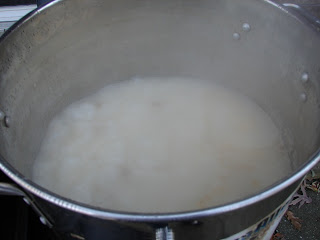 After all the water is cooked off, and the fat is cooked out of the meaty bits, pour through some cheesecloth and a strainer into a pot, or two. The lard should be pretty clear.  (this leaves 'cracklings'.  Do with them what you will.  We through them out) Let cool for a while and add cool water.  Put in fridge overnight.  This will clarify the lard. 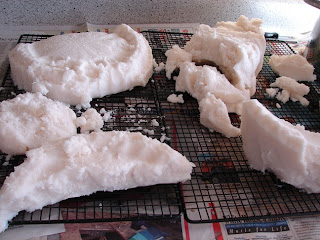 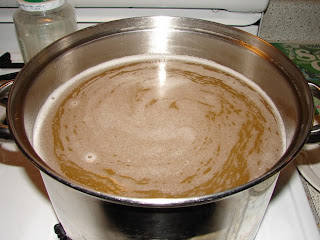 Put lard back into a pot and melt. 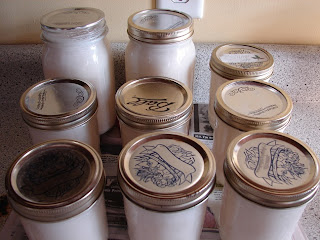 That's why she makes the BEST biscuits! and her soap is really moisturizing to the hands.

A woman once told me that during the Depression Years the kids were sent to school with lard sandwiches. That would be hard to swallow. I know what you mean about lard as it made the best doughnuts I've ever tasted. Small amounts of lard and butter too are fine as they are better than a lot of the products touted on our grocery shelves to be healthy when they have so many chemicals in them.

I used to do this w/my mom. I don't know why I don't anymore. Thanks!

Fascinating! You are so cool. :)