My daughter has a friend who was very recently diagnosed with Ideopathic Scoliosis.  The Ideopathic part means they don't know why.  She is scheduled for surgery this Wednesday.

When E came home with the news I asked if she wanted to make a quilt for her friend - there will be a fair amount of couch/bed recovery time.   Two weeks before surgery, E decided yes, so we quickly got to work.

I handed E my stack of Missouri Star Quilt Co magazines, because the patterns in there are fairly easy and straight forward, starting with pre-cuts.  Of all the patterns she could have chosen, she chose Falling Charms, which I had most recently used on this quilt. 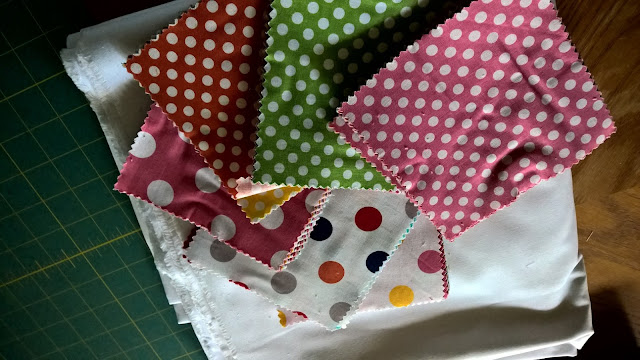 I had some charm packs of Riley Blake Polka Dots. 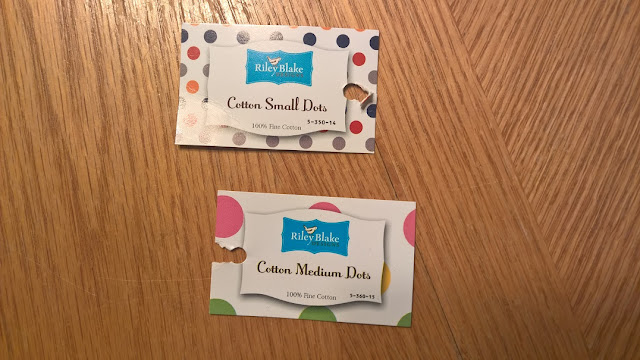 Notice the number of charms in each bundle. This becomes important later. 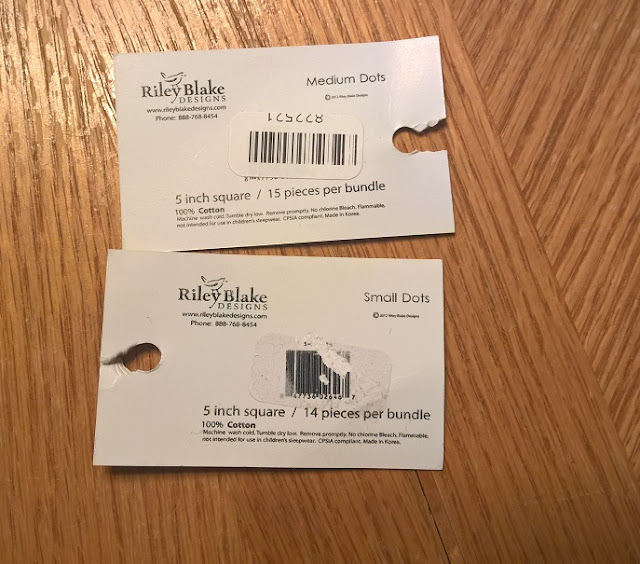 Medium and small dots - and I went out and picked up more Kona White.  I seriously need to invest in some bolts.... 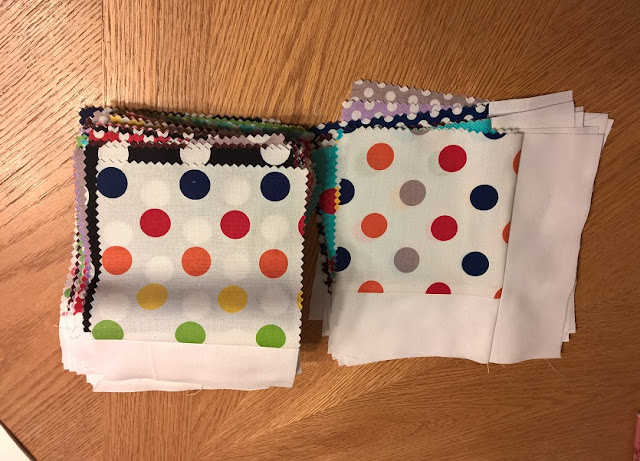 I started cutting 2.5" strips and E started sewing, I pressed and trimmed, and we quickly had a pile of blocks. 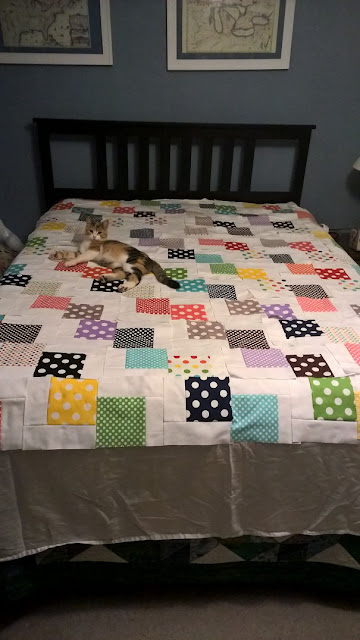 Laying the blocks out on the design wall my bed.  With help from our newest cat, Juniper- more on her another time. 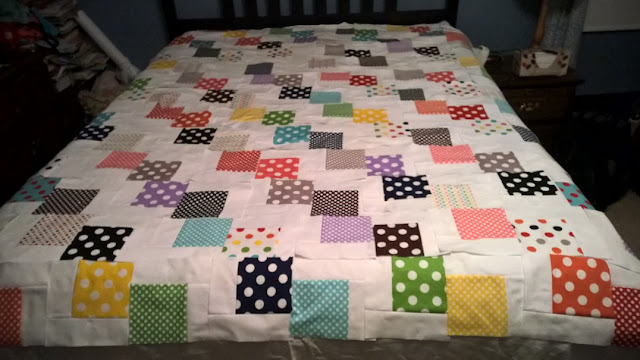 I promised myself I would let E lay them out however she wanted and not try to "fix" it. Its hard to see, but toward the top there are four blank spaces.  I had done the math, thinking each charm pack had 15 blocks.  They didn't, so we were four blocks short of a 10x12 layout.  After visiting all three stores in town that carry fabric, E picked out some pink and red that worked well enough - and we moved on. 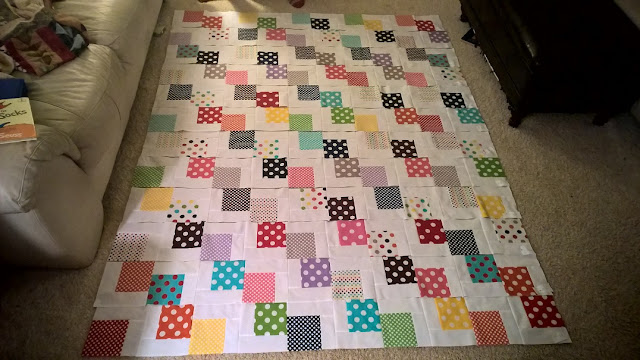 Laying on the rows to make sure everything was ok.  Found one mistake - its at the top of the picture if you want to look at it.  We got the whole top finished on election night.  It was going to be a late night anyway... 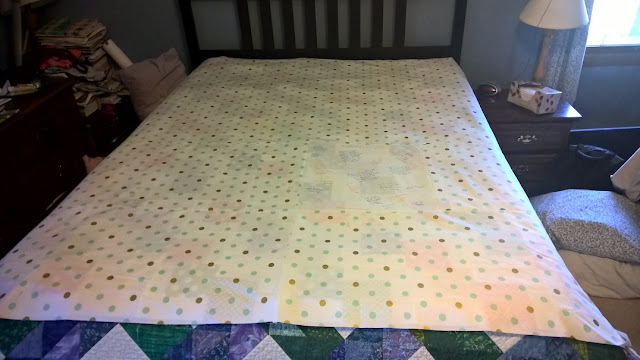 The next morning I prepared the backing.  More polka dots.  These are from Joann, when I bought fabric at their closing.  That not matching block?  A signature block from the kids and adults at the girl's youth group. 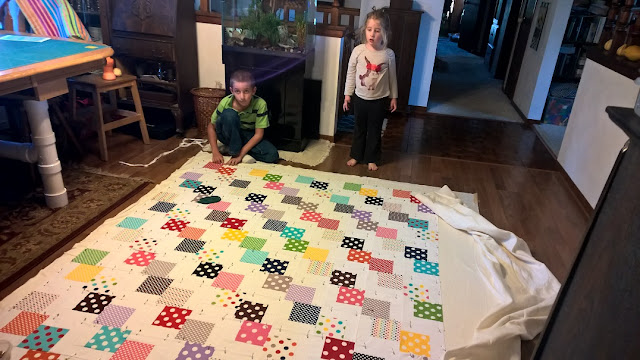 That afternoon I got to basting - with some help, and non-help. 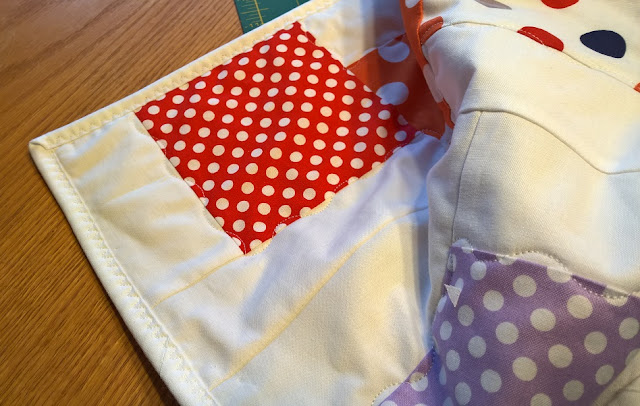 Quilting is a loose wavy line along the zig-zags.  E didn't want much in the way of quilting, even to the point of asking me if we had to do quilting.  I explained that if I didn't, it would turn into a big, weird, lumpy bag/pillow thing.  I put the binding on by machine -partly for time and partly for sturdiness.  I was pleased with the wavy stitch. Also, I tried to talk E into a color binding, but she was having none of it. 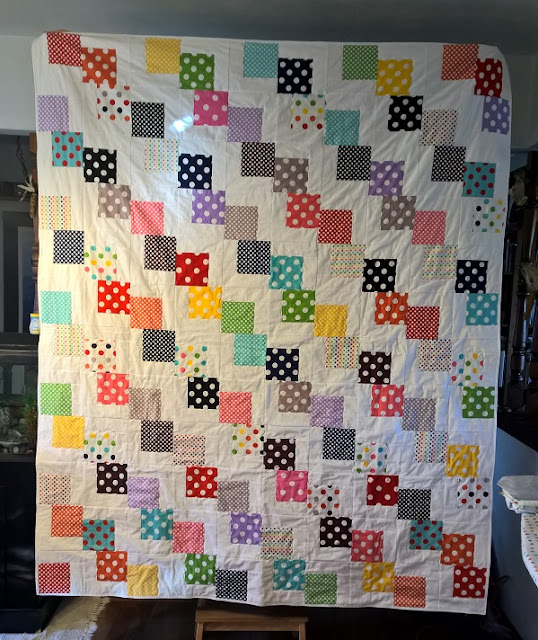 And so, a finish.  It ended up about 78" x 60".  Unfortunately I was unable to wash it before we had to gift it.  We are having some major electrical issues in the house right now, and since we have a private well, we have no running water right now. 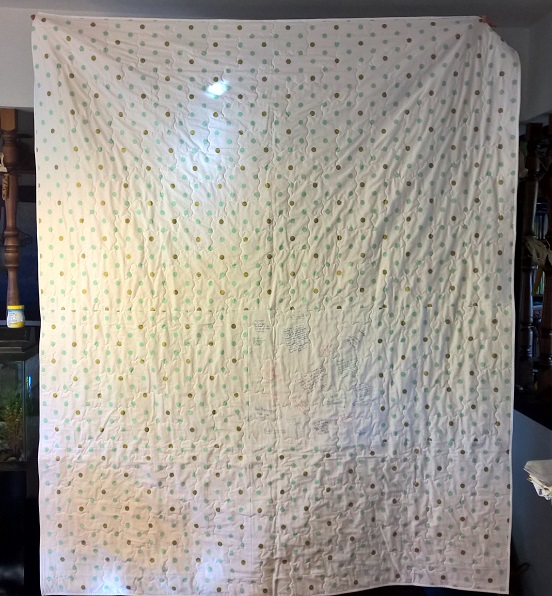 It was great fun to gift it yesterday, and I even got a hug from the girl and tears from her mom. 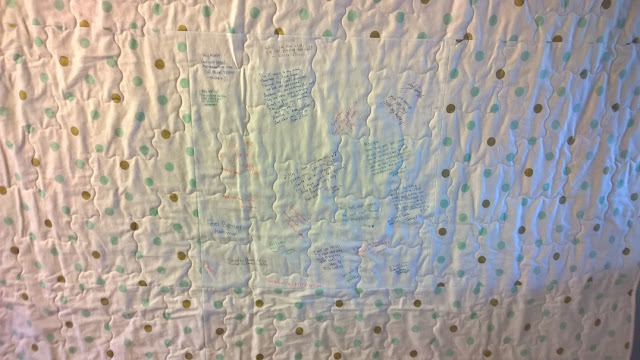