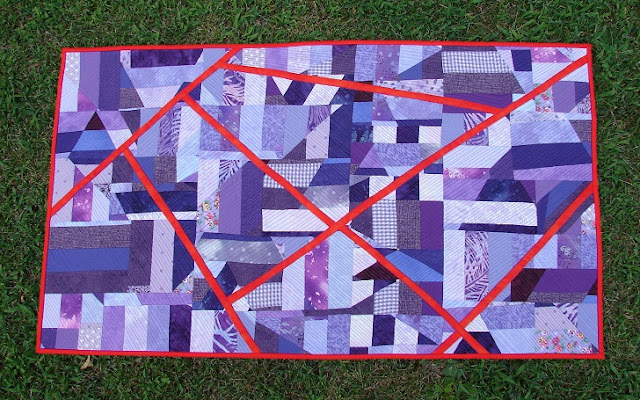 This Purple Passion Quilt was my attempt at improv piecing.  As I was pulling my purples, I realized that I didn't really have small purple scraps, and I wasn't willing to randomly slice into my purple stash to make and leave more weirdly shaped pieces.  I also don't appreciate the waste of traditional improv piecing.

I will attempt to explain my process in this blog post.  I truly didn't have much cut off left-overs when putting this quilt together. 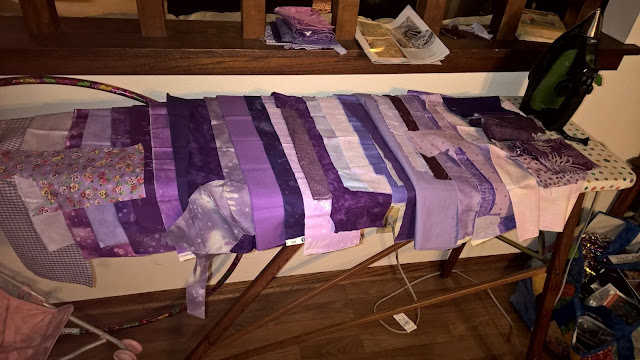 This is my purple stash laid out on the ironing board, where I contemplated my approach for a couple of days. 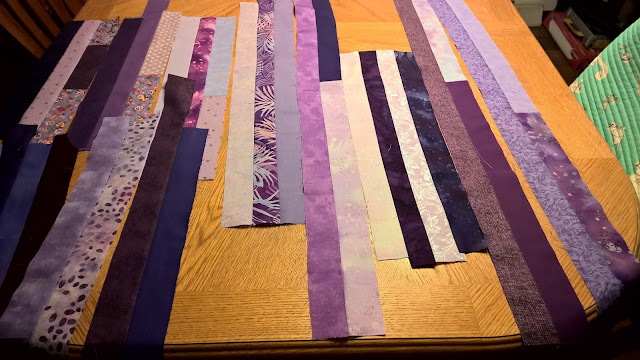 Then I started cutting.  I cut one two inch strip from each piece of purple fabric that I had.  I cut the strips from the longest side to maximize fabric.  The above picture is after I started piecing.  I matched up sizes that were as close as possible.  I started by sewing the long sides together, for the most part, but in places where I needed a longer strip to match, I pieced the short ends together, then added that piece to a long piece.  Eventually I had all the strips in sections of either 3 or 4 strips wide. 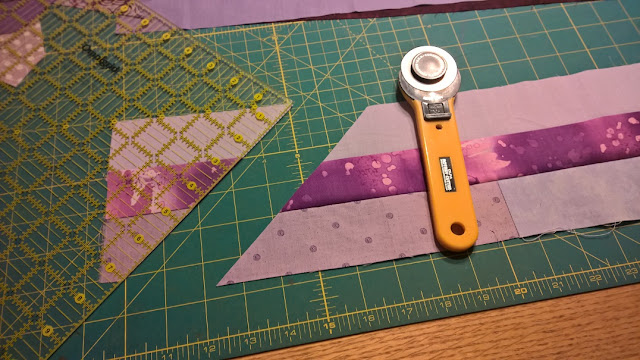 This is where the controlled cutting began.  With the three strip sections, I started making 45 degree angled cuts randomly along the length of the piece.  I changed the angle back and forth at will. 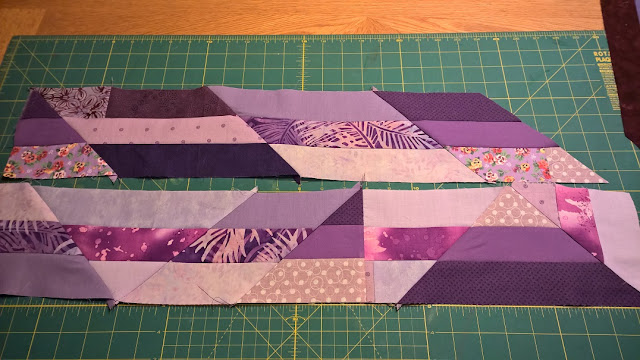 The I sewed them back together, making sure to not match up same fabric sections. 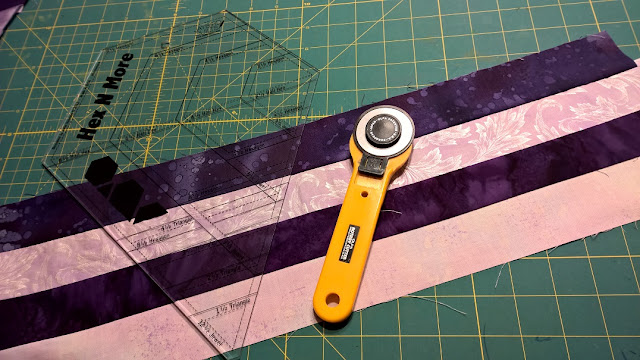 On the Four Strip sections I randomly cut 60 degree angles.  One thing to note about the angle cuts, if you cut true triangles, you can rotate the direction of the strips when you piece them back in. 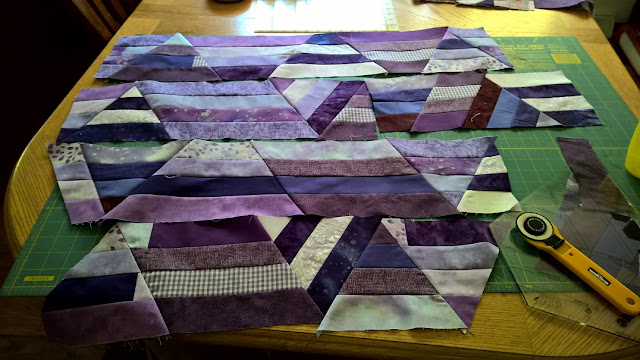 Above is all the 60 degree, Four Strip pieces put back together.

Its not shown in a picture, but I filled out the ends so that they would be straight.  I think it was a combination of a couple more cuts, plus adding in the bits I had cut off before. (Using up all the pieces!) 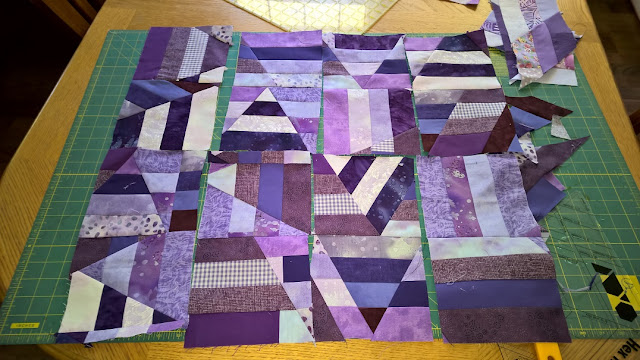 At this point I took the Four Strip pieces and cut them into blocks.  I believe they were 6.5" square.  (take notes, people, if you plan to write a blog post two weeks later!)  The above picture is the blocks being pieced into four rows of four each. 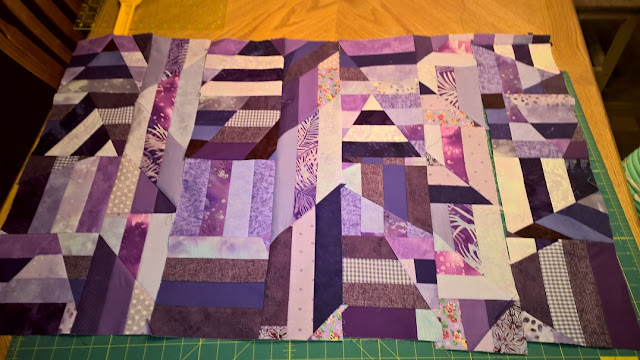 In this picture you can see the vertical Three Strip pieces inserted between the Four Strip rows.  I sewed them into pairs, and then did more cutting. 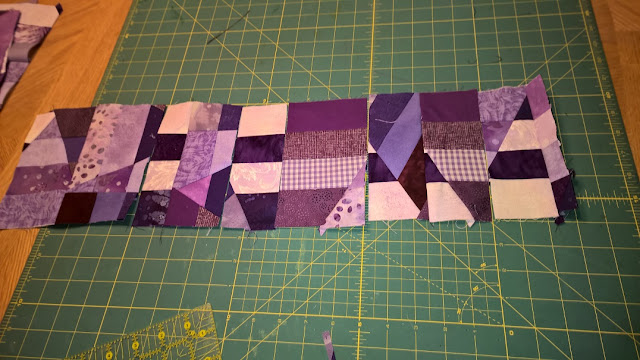 It was "measured random"  I measured each piece, because I wanted to cut all the strips the same and then be able to move them around, knowing they would fit (no waste).  Above and below show the cuts. This also allowed me to rotate them when I put the pieces together so that less seams would line up, creating more of the improvisational look.

Below, is all the purple pieced together.  To my eye, there were still some pretty obvious straight seam lines that I wanted to break up. 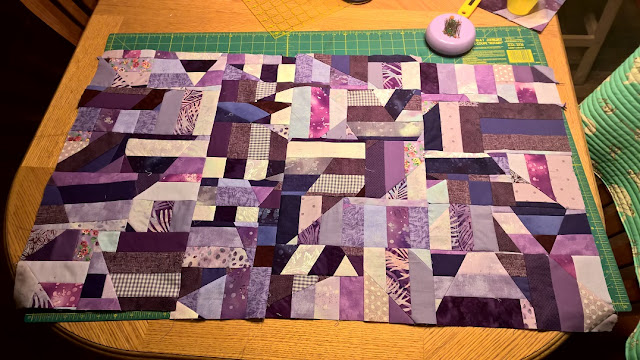 I knew I wanted to use the red/orange fabric, so I experimented with some shapes to break up the lines. 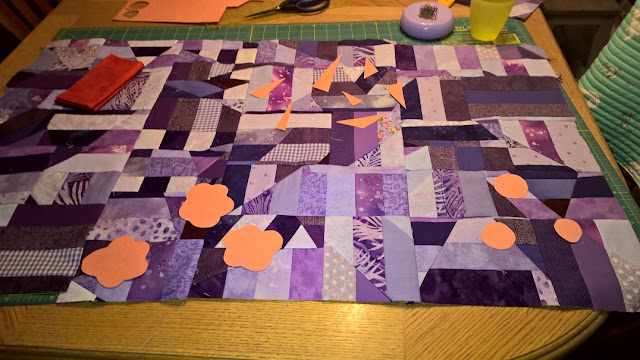 But then I thought of piecing in the ribbons.  I laid them out in a design that I liked, 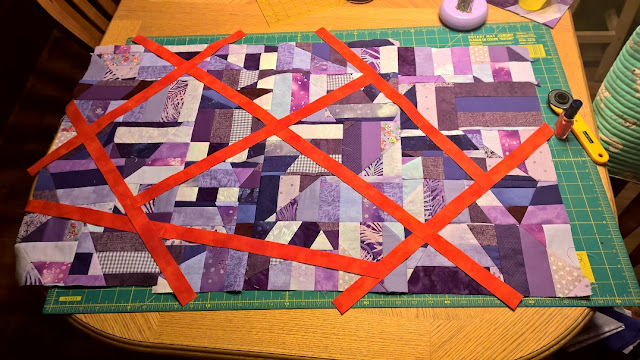 sliced the lines, and started piecing in the ribbons. 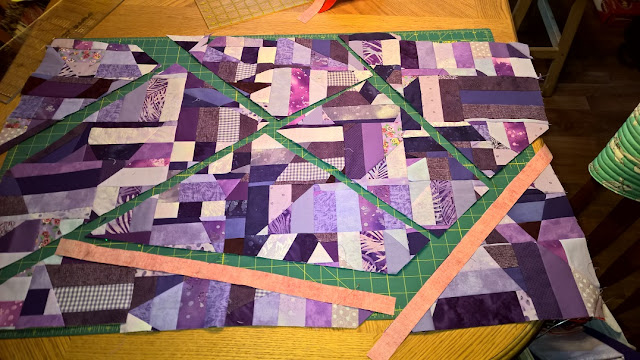 A shot of all those seam lines on the back.  I rarely press seams open. Only when I have to. 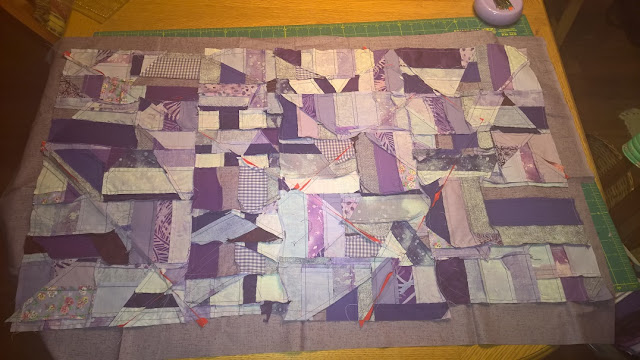 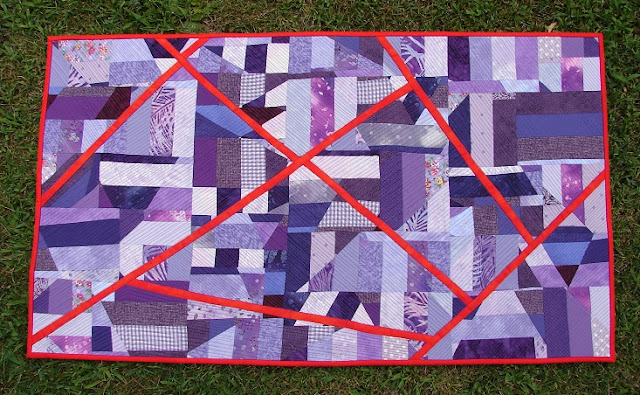 And the finished piece, from another direction.

So, you see, with the controlled and measured cutting, I was able to achieve a more improv look with out the cutting and slicing of pieces to make them fit.  Even as I look at this, there are a few more places that I would like sliced up - but I'm pretty happy with it.

I know that this was a pretty vague tutorial.  I didn't realize until I was pretty much done, that I probably should have taken more pictures to explain it better.

If there is a lot of interest, I'll make another quilt and do a better post. 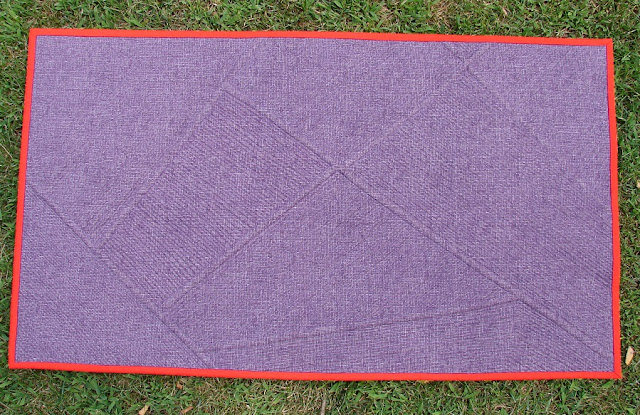 Thanks for sharing this tip - I want to have a go now! I absolutely love the back of the quilt - I think it is really beautiful in itself and it highlights how perfectly balanced your composition was.