Red: A Four In Art Reveal

It's the first reveal of the year for our Four-In-Art Group.  There have been some change ups in the group, so I'm excited to see what everyone has come up with!  Our theme this year is Literature. 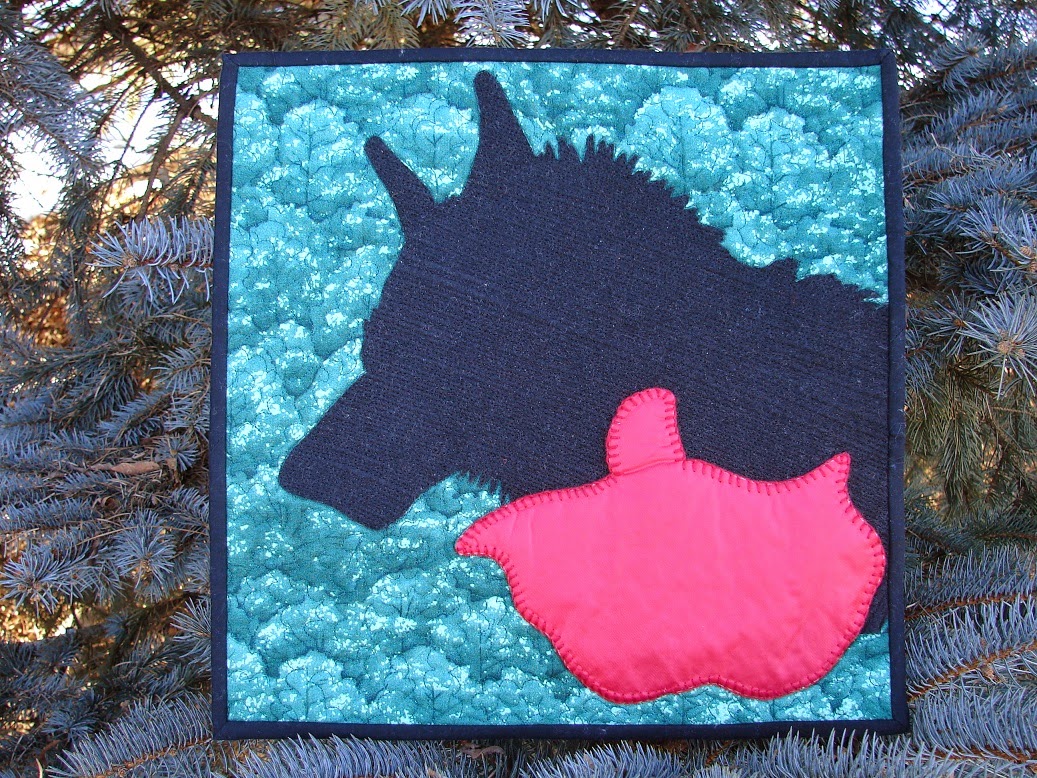 As a group we decided on Literature, but from there we could each decide what we wanted to do.  I finally decided to go with Fairytales. 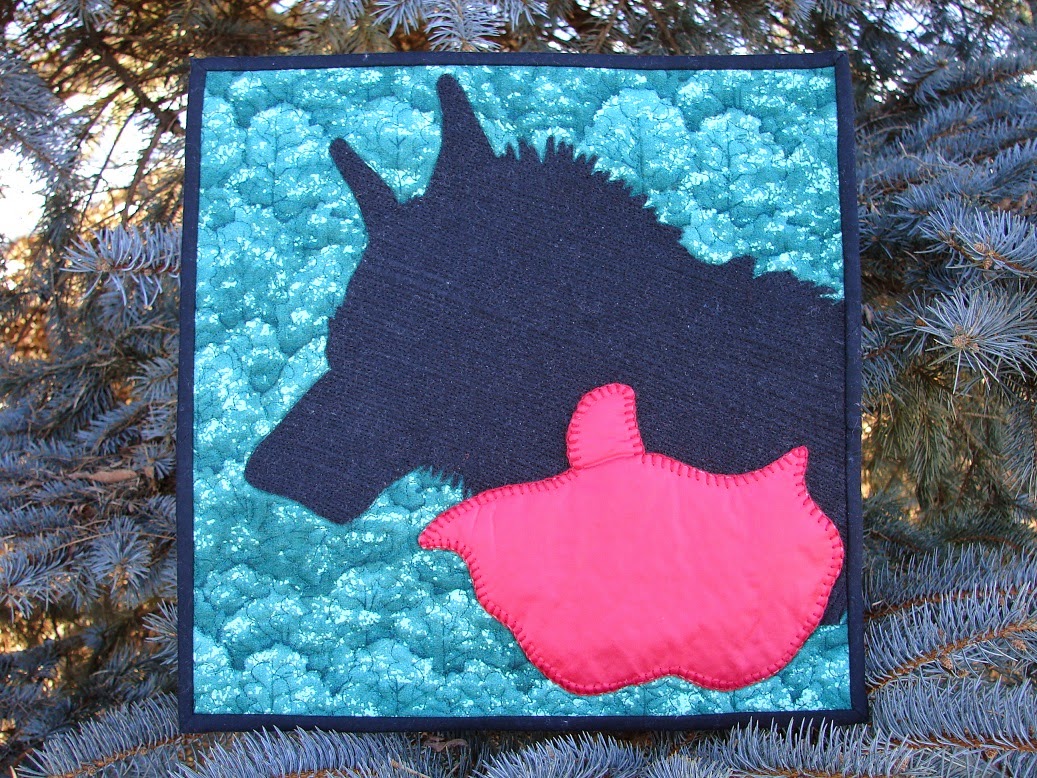 When I originally started this idea, I had visions of layer upon layer of a sort of fabric collage.  I've been reading lots of artsy magazines lately.  The first thing I prepped was the wolf.  (BTW they just look like dogs in silhouette)   Then I did the cape and pulled out the woods fabric.  And then I was done.  It was simple and perfect and I love it so much. 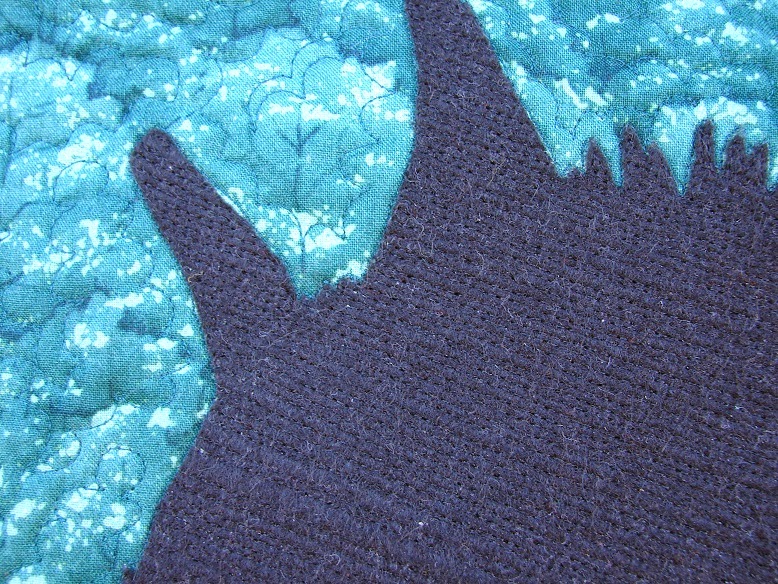 The wolf is just a cheap polyester felt that I did intense (mostly) straight line quilting on. 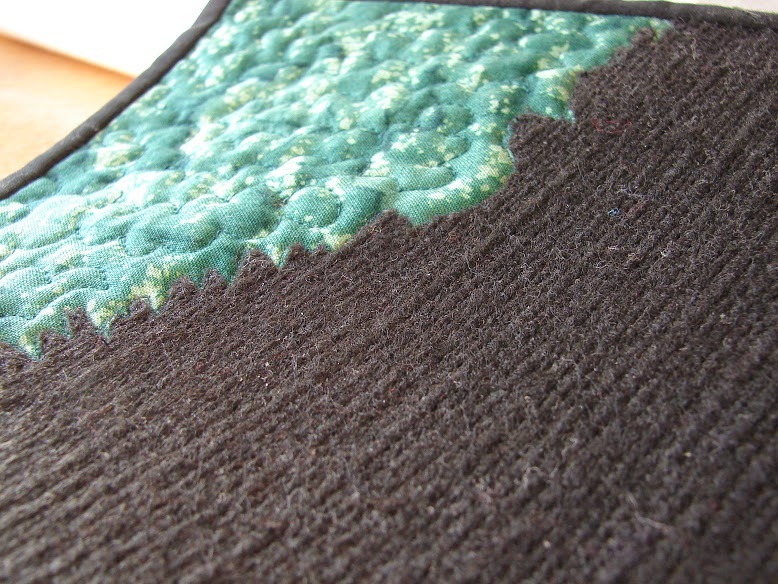 The cape is a poly lining fabric from a dress that I made for E (but never blogged).  I liked the soft shiny contrast compared to the dark slightly fuzzy felt of the wolf.  There is a layer of batting fused to the red and then I did a blanket stitch around the edge to secure it to the quilt top.  It is just quilted around the edge. 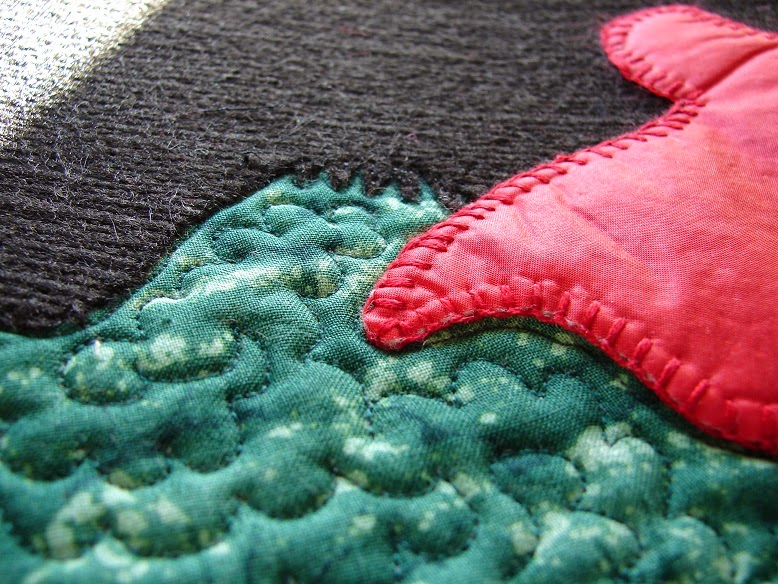 The back.  I did finish the binding by hand.  I had the time to do it, and I generally like the cleaner look on the front.  The backing fabrics both came from my mom's stash. 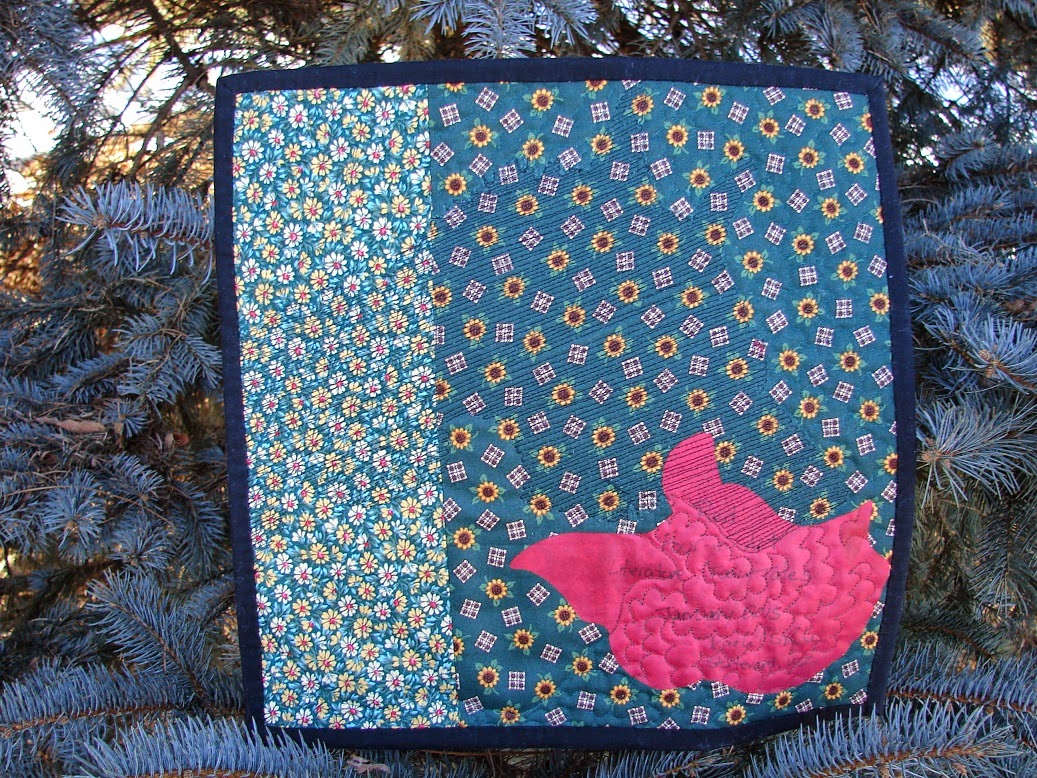 The label was an extra cape that I had cut, it was too small and ended up with a water stain on it, but fun for the lable -  if a little difficult to read. 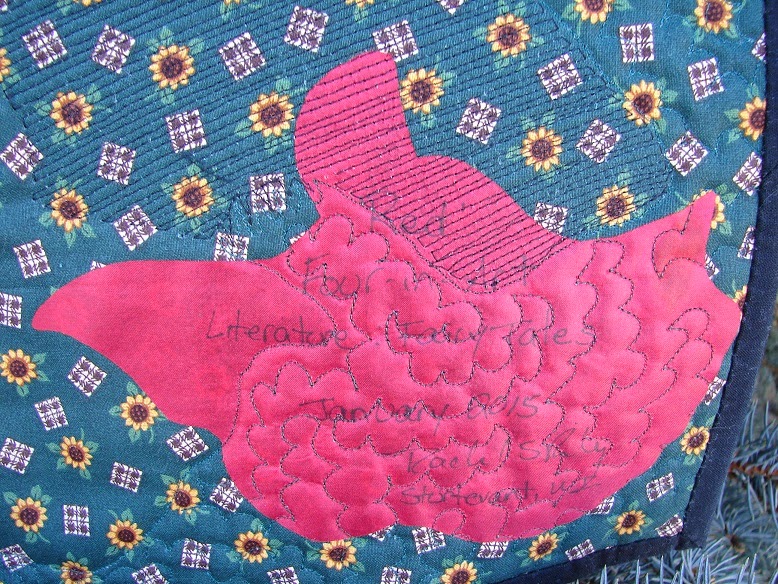 This little quilt is a 12" x 12".  A thin cotton batting and quilted with Aurifil, green and black.

Please check out the other little quilts by my fellow Four-In-Art quilters.  I will be checking them out, too!

Betty at a Flickr site: http://www.flickr.com
Catherine  at Knotted Cotton
Elizabeth at OPQuilt.com
Jennifer at Secondhand Dinosaur
Nancy at  Patchwork Breeze
Rachel at The Life of Riley
Simone at Quiltalicious
Susan at PatchworknPlay

I love the quilting you used on this little quilt. It is a fun way to interpret the theme.

It's so interesting seeing the different takes on the theme. I love that this is a deceptively simple image but has so much going on in terms of textures and choice of fabric with your felty wolf, shiny cape, and quilting. It's got such a great sense of foreboding to it with the shadowy wolf looming over!

That wolf!!! (So much better than the Johnny Depp interpretation in the recent flick "Into the Woods," by the way.) I love that wolf with his gnarly fur that is only made better by the quilting.

The cape looks like he just coughed it up--Little Red Riding Hood freed from the hackles of Mr. Wolf and floating down over the scene. So perfect, along with that woodsy background. I like all the techniques you used, and loved the label, too!

Well done! I'm loving this Literature series. Like I said to Susan, I thought I was pretty tapped out for ideas, but this theme has rejuvenated me!

I think your quilting is just so good on all your pieces. And that this piece is so small, just love the lines on the wolf. And talk about "Little Red Riding Hood" that cape is little! Even as large as that wolf is, he does not win!

I agree with Catherine! This is another wonderful example of how rich and deep your work looks with your quilting!

What a great portrayal of the fairy tale! It will be fun to see what other ones you create on this theme. =)

Rachel, you say your wolf just has straight line quilting on it, but it must have taken a LONG time to quilt all of that! I totally recognize the wolf as a wolf and not as a dog. His snout is too sinister shaped to be a dogs:) So fun to see a fairytale portrayed here. I look forward to seeing your other projects this year

Hi Rachel. I'm popping in to see how you all did with this first Four-in-Art deadline and just love the theme of Fairy Tales. Your minis always amaze me with all the quilting you do. Nice job.