Hello Bloggity Blog readers.  Its been a while, eh?  It seems that lately its been hard to force my self to slow down to take the time to sit at the computer and blog.  Today, I'm taking some time.  Oh, and for those of you that asked, Mr. Riley is doing quite well after back surgery.  The surgery itself was successful, there is still some recovery time, but today he is back to work after three weeks off. (coincidence with a blog post? hmmmm.....)

Anywho. A couple of days ago I had an idea that I just had to try. 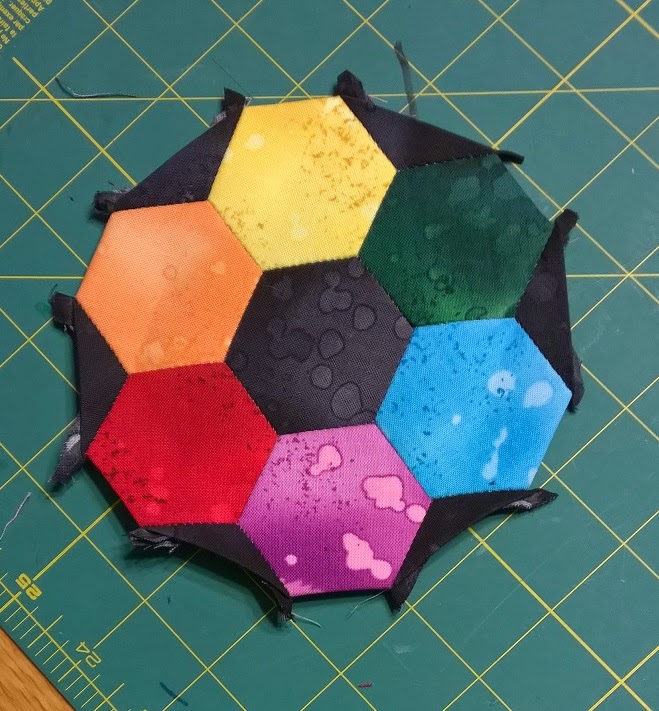 I grabbed some fossil fern in a rainbow selection, did some quick glue basting and English Paper piecing and put together what I thought was going to be an awesome pin cushion. 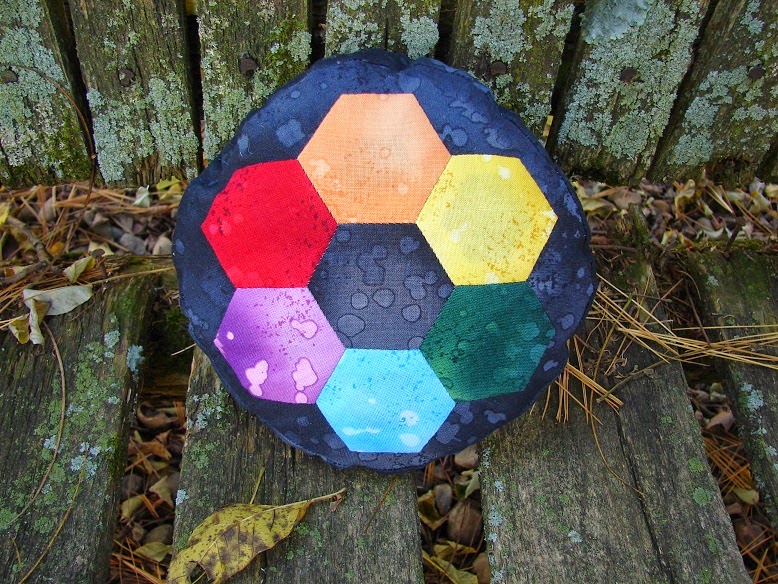 It didn't turn out quite as awesome as I had hoped.    For one thing, actually the major thing, its huge! 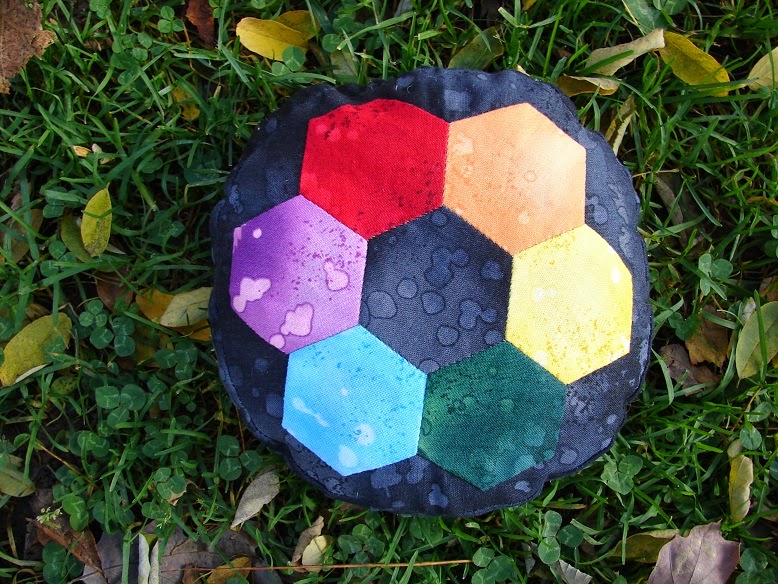 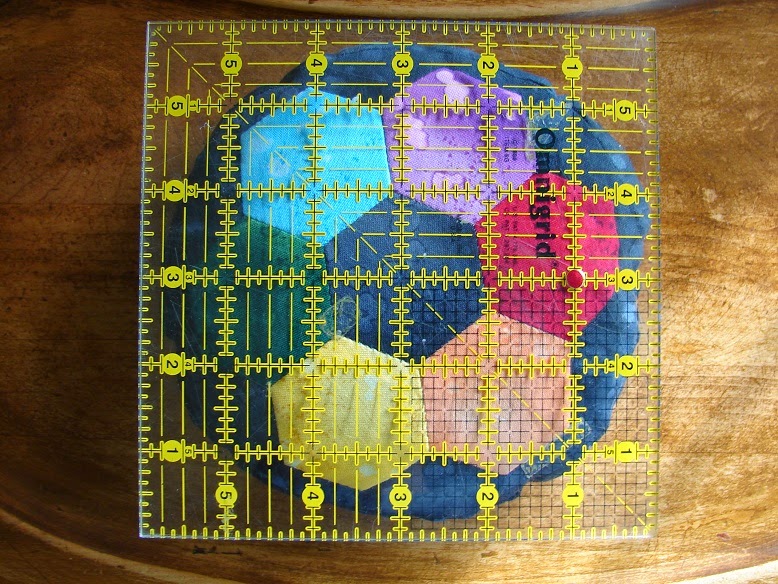 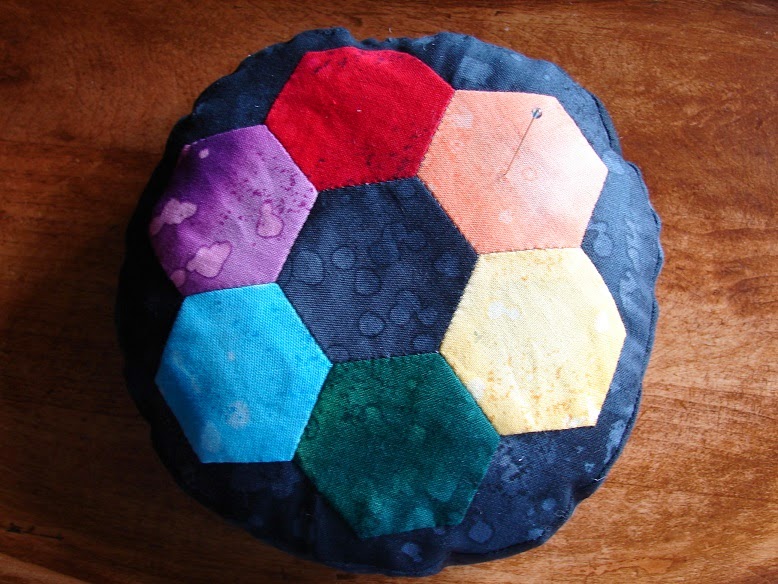 Look at that sad little pin in there!  Oh, and when I appliqued the hexies, they shifted, so they are not quite centered.  Sigh.  I had honestly hoped to give this as a gift, but it is not quite up to my gifting standards.  Kinda looks like a weird soccer ball. 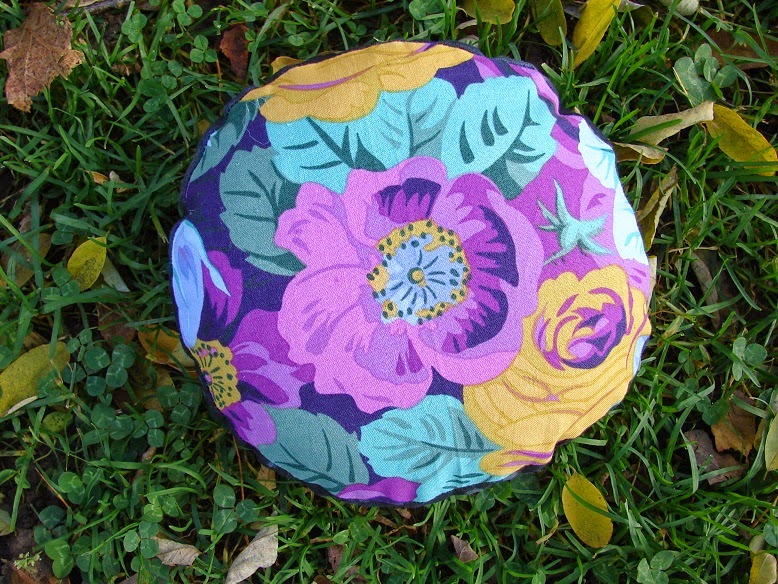 The bottom.
I filled it with a combination of walnut shells and fiber fill.
I may use it to keep track of my machine needles.  Write on each hexie a type of needle and then I can reuse them and not forget what they are...  It would probably make a decent pattern weight, as well.

Back to the drawing board.

Could you diminish some of the soccer ball effect and re-center it a little by making stitches from back to front through the center hexagon? You'd end up with a bit of a donut shape that way, but it might make the pincushion a little more low-profile, and not so dauntingly-large looking. Plus, there might be something fun you could do with the center divot, like use big-thread stitches to make it a negative-space hexagon inside your navy one, and then you'd have a fun "well" to set needles, or other small quilting supplies in.

It's so cute! The rainbow colors and brightness make up for its large size. =)