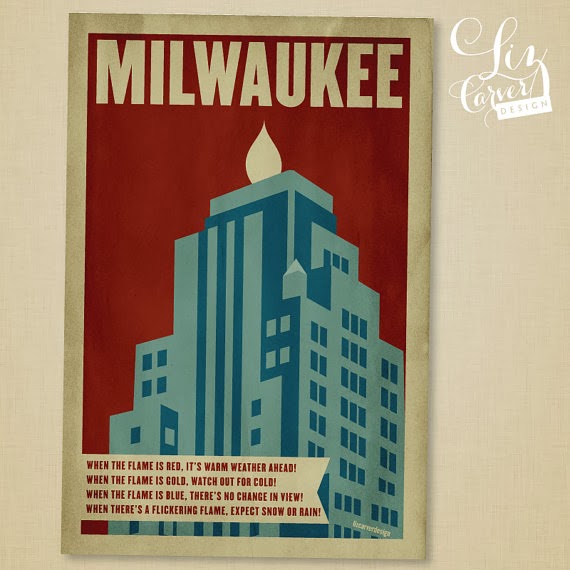 Today's post is a bit more of how I put this particular quilt together.  Part of the reason I was drawn to this print by Liz Carver, is because of the simple and bold lines in it.  It captured the essence of the building.  And, quite frankly, I can't draw like that.  I would never be able to distill a picture of the building down to the basic lines.  My brain doesn't work like that. 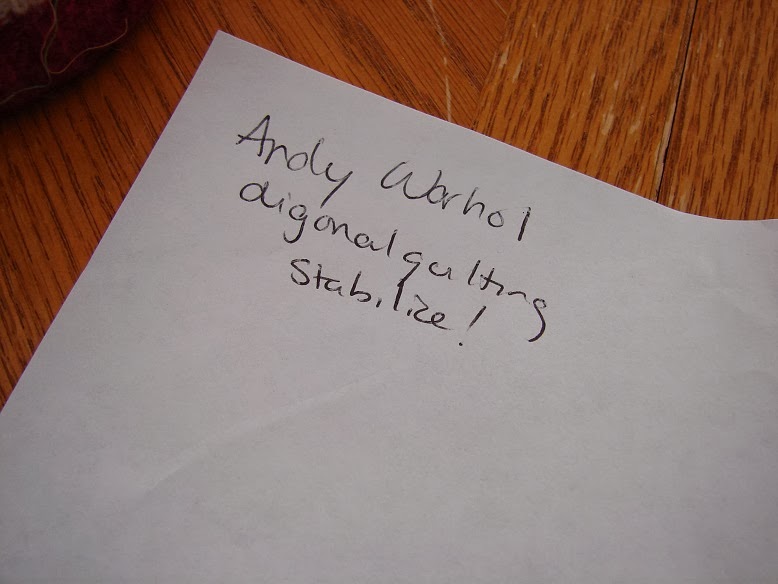 When I was still daydreaming about my plans I wrote up three things: Andy Warhol, diagonal quilting, and stabilize!  Well, two out of three isn't bad.  So here's how (and why) I went about constructing this thing.


I mentioned previously why I did the four color thing.  It all goes to the flame on the building and the poem.

I decided that I would like to try using a freezer paper pattern that I could iron to the fabric and cut around rather than using a fusible (and tracing the pattern 4 times).  I also thought that if I used some stick glue, it would help keep things softer for the quilting part. 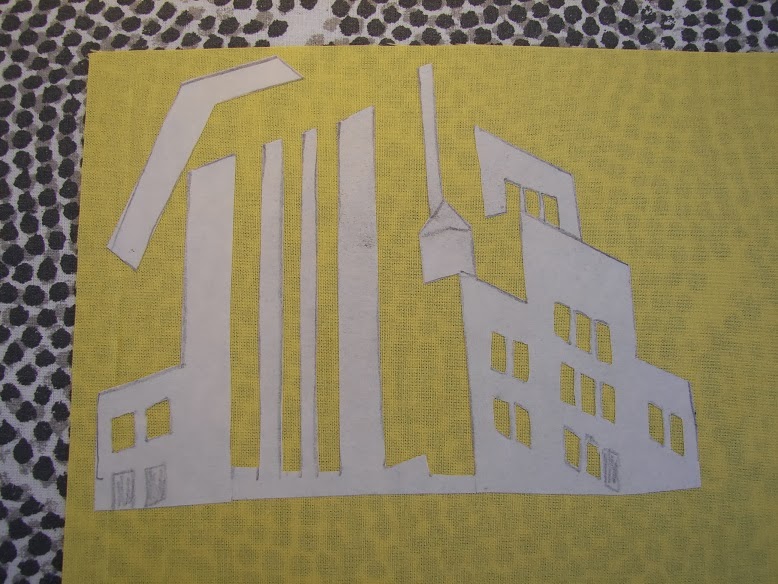 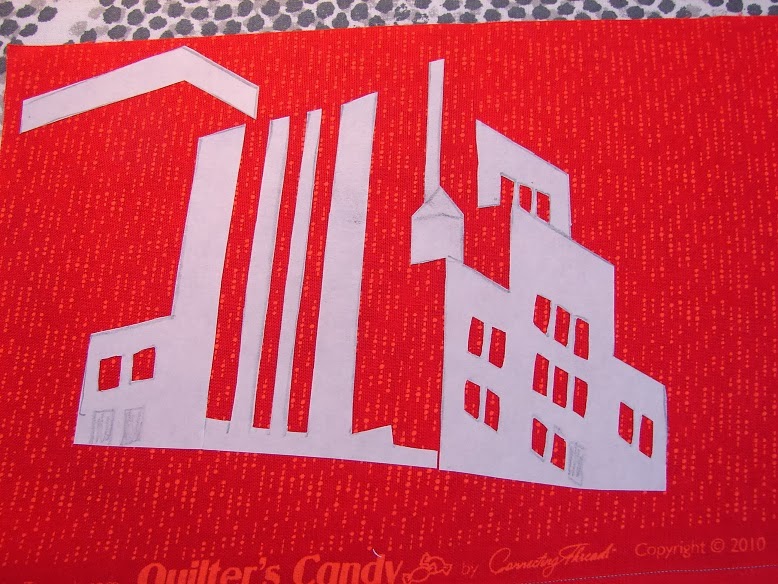 I guess I would say it worked reasonably well.  Parts of me wanted really crisp lines, but with this method, that's just impossible, so I had to let it go. 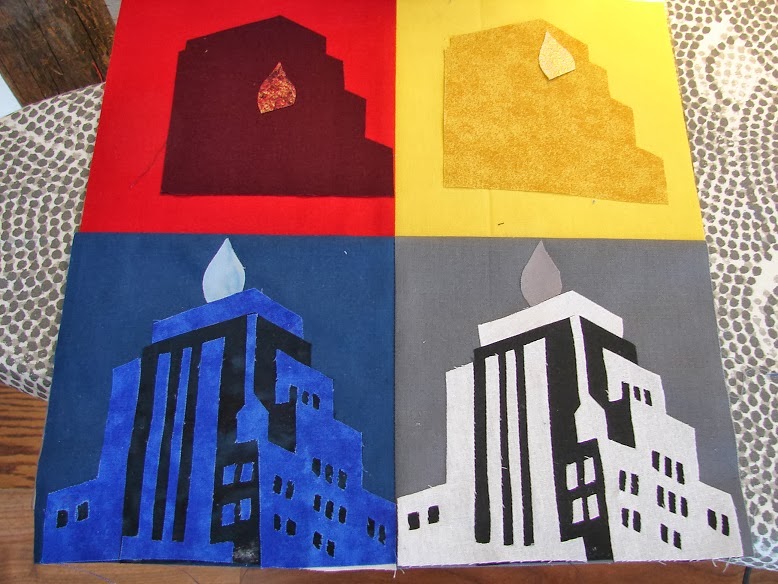 Building the pieces.  Everything is held in place lightly with stick glue. 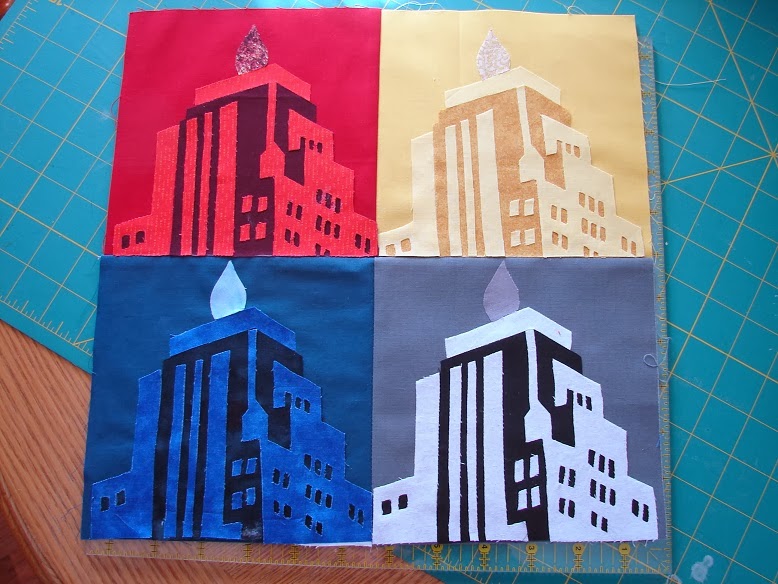 So at this point I've got a 12.5" x 12.5" square top ready to be quilted.  I took the top with me to the fabric store to try out what I wanted to use as an overlay.  I did this after reading Elizabeth's (fellow Four-in-arter) last Mini Quilt post about different sheers for overlay.  I brought home a champagne organza and a grey tulle. 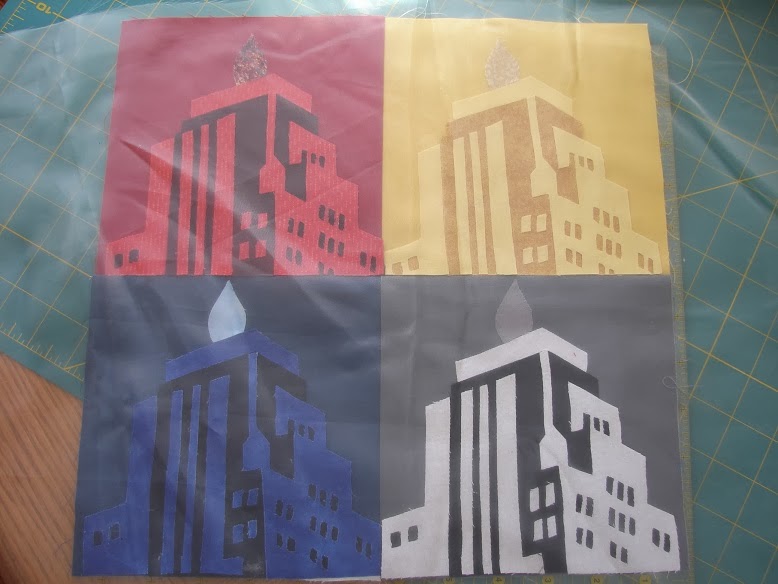 This is the organza. 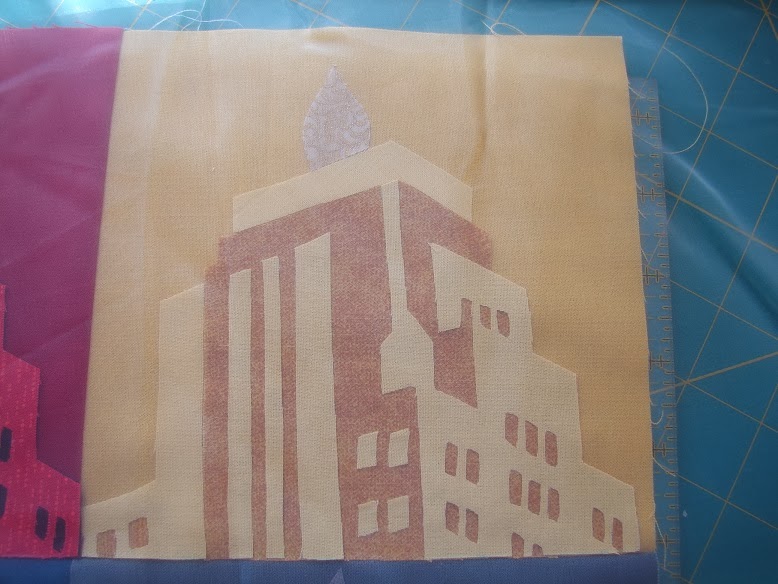 Below is the tulle. 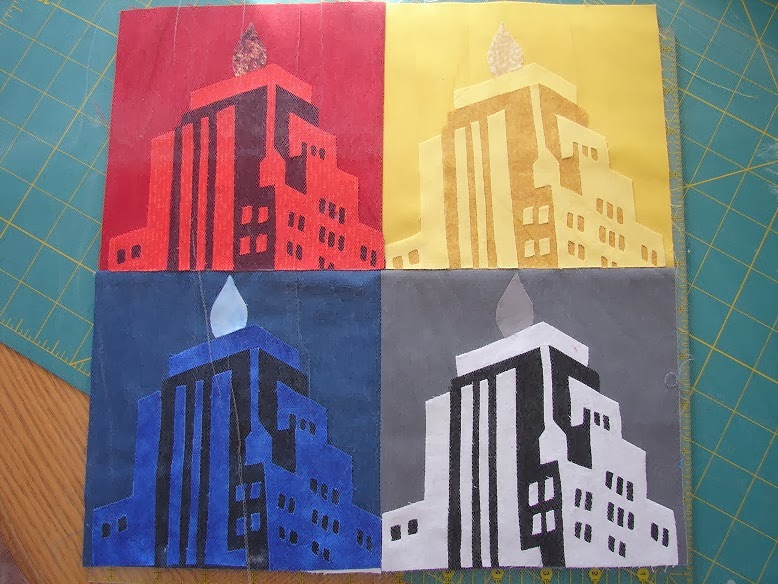 I ultimately went with the tulle.  I felt the organza washed out the colors too much for this particular project.  I also learned that you can steam blast tulle to the get the wrinkles out.

So the quilting.  I had originally planned diagonal straight line quilting with my walking foot, but, as I was in the basement riding the bike to nowhere, I realized that my walking foot might not play nice with the tulle.  I tested and was right!  Caught and tore it.  So, what to do.  I needed something dense to hold all the pieces down and in place.  Solution: Matchstick quilting that I was totally and completely stole from inspired by Leanne.  (her Cycles quilts are phenomenal.  Seriously.)  So I put on the free motion foot, Superior Threads clear in the top, Grey Bottom Line in the bobbin and went to town. 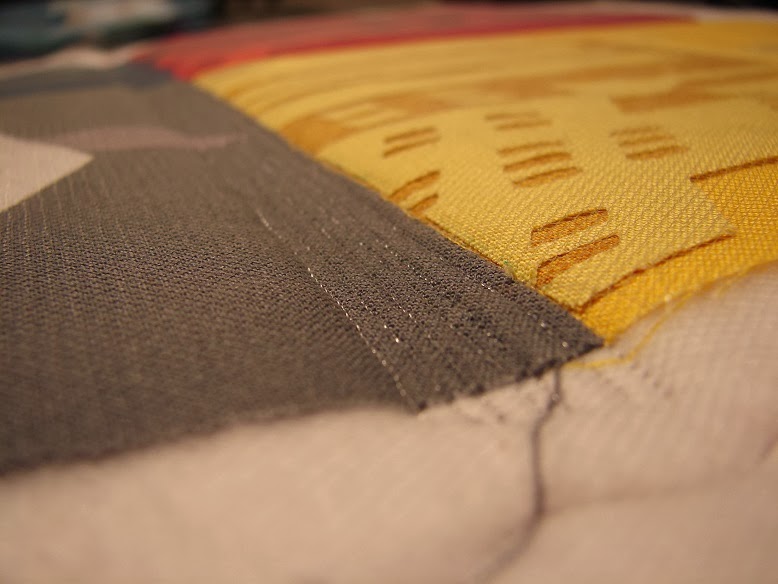 This picture is to show you the difference between the quilting and the 'puff'. 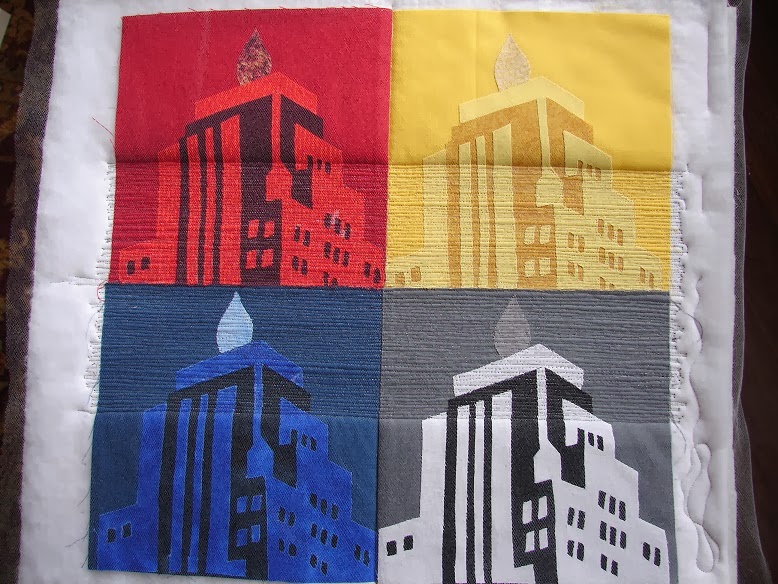 I stabilized stitched along the seam lines, and then started from the center and worked my way out. 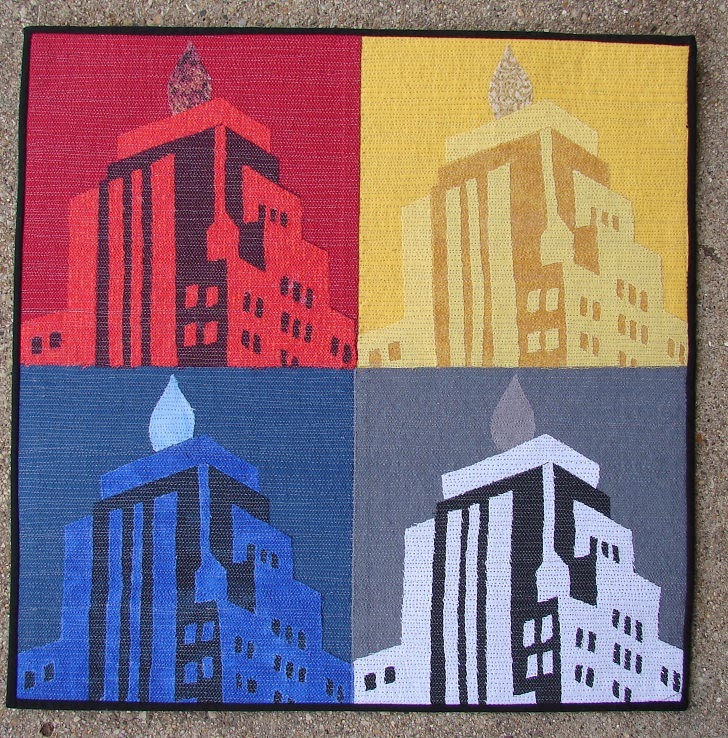 I've got the narrowest binding I could manage on it.  I would have preferred to face it, I think, but I didn't think I could get it wrapped around with the Pel-tex in there.  In real life, the quilt has a definite sheen to it from a combination of the tulle and the 'clear' thread.  It isn't unpleasing.

All in all, I am quite happy with how it turned out.  For me, creating these things is a journey.  I really never truly know what it will look like until I am done. 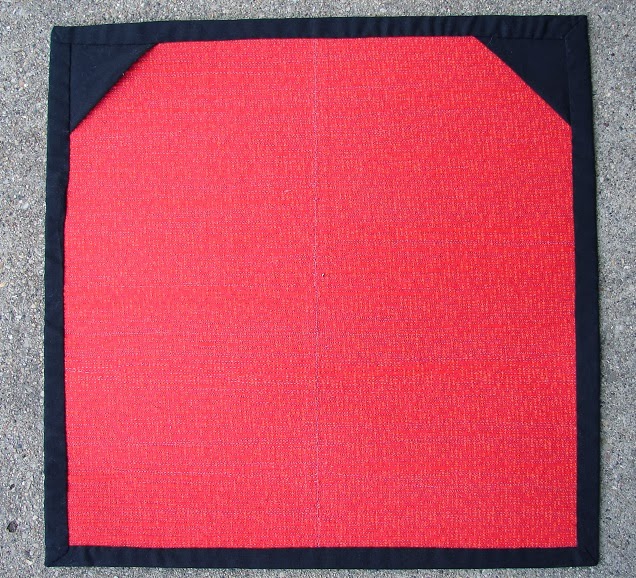 And a couple pockets on the corner for hanging.  And the label?  Still jammed in the new printer.  It's been a busy few days...

Nice to read about your process. I've never used tulle or done any matchstick quilting but like the effects of both. I think the tulle was definitely the right choice.

You nailed Andy Warhol! I was telling your Dad it looked like an Andy Warhol just yesterday. Great job!

Thanks so much for sharing the process - awesome quilt that I absolutely love!

Thank you for sharing the process. I love this quilt and the quilting just makes it. Glad to be inspiring on that front.

This turned out great! I love this building and was hoping you would choose it! I wouldn't have thought to use tulle. I just might steal...er.....be inspired to use it in one of my projects!

Really wonderful! And I enjoyed reading about your process.

This is wonderful. A work of art!

Hahaha I feel so clever I said it looked Warhol on your previous post!