I had really hoped to have Si's quilt top done to show you today.  I got it all put together on Saturday, laid it on E's bed to size it up, and decided it was not wide enough.  That's what happens when I make these things up as I go.
As a result, I can't look at it, or work on it.  I need to decide my plan of attack.  I suppose you're wanting to see it... Well, I'll go take a quick picture. 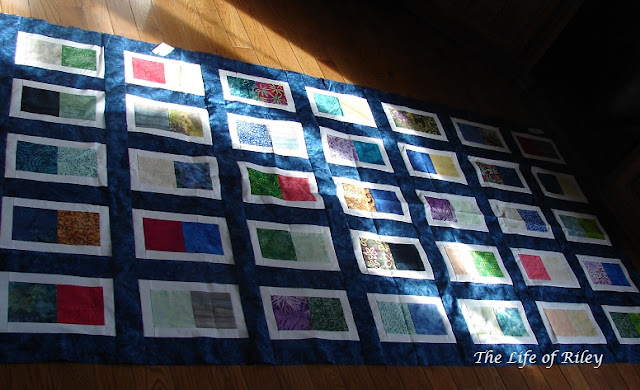 I do love the way it looks with the blue and white popping out the colors, and its plenty long, but to just add another row or two of blocks puts seams where I don't want them.  The perfectionist tendencies are coming out.  After all. its for my kid and he'll (hopefully) have it forever.  On the other hand, he's turning two and who cares, right?  Maybe its just the disappointment of having to start, again.

And so, I'm doing some garment sewing.  For me.  The Meringue skirt from Collete.  I received the Sewing Handbook for Christmas.

And I've been wanting to enter a sewing survival contest.  But its really hard to pick which project to submit. A quilt?  Clothing?  A purse?  I need to decide soon.

Here's hoping all your projects are going better than mine....

Wow...this was eerie to read today. LOL I did a similar quilt last year for the Robert Kaufman challenge and this quilt and my quilt look like siblings! I love your take on the pattern though and looking through your blog...we also share a "love" of all things Legos!

As for the quilt...can you put a sashing of white around so it's not so long? I love it and hope the creative juices help you finish it up quickly! What a sweet mom for making such a beautiful quilt for her son!

I have experienced the too long problem several times myself. Very frustrating I know. Maybe you could add a wide side border of some kind. Good Luck, I'm sure a solution will come to you if you take a break for a while. Peggy