When this round's theme of Landmarks was put forth by Amanda, I didn't have any trouble coming up with ideas.  You can see a post I did *here* a while back.  The Colosseum, Mitchell Park Domes, and Central Park.  I ultimately decided on Central Park.

Central Park has been designated as a National Historical Landmark, so I think it meets the requirement for this little challenge.  And if you've ever been to New York City, I can't imagine that you didn't visit at least a part of Central Park.  When Mr. Riley and I went 6! years ago, I visited the American Museum of Natural History, strolled through the park a bit and also had the best New York Cheesecake and chocolate cupcake in a bakery just across from the park.

Here is my 'Modern' take on Central Park, which incidentally is also known as 'Plan C'. 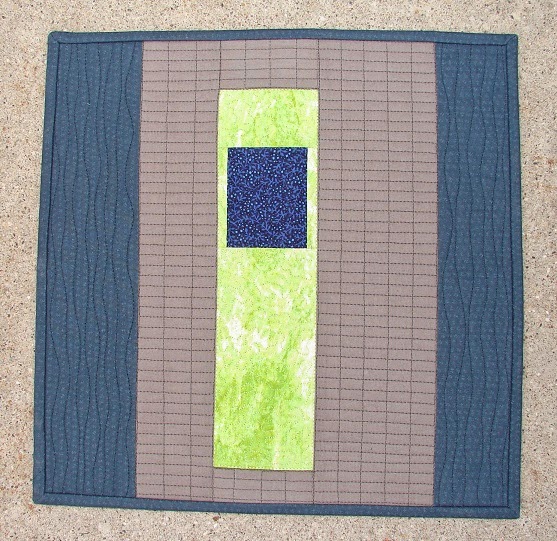 I took the view of Manhattan Island with Central Park from above and distilled it down to its major straight lines.  That being the Hudson River on the left and the East River on the right.  The Jacqueline Kennedy Onassis Reservoir is the large blue lake in the upper part of the Park.  This was a good exercise for me as I have a hard time letting go of the literal interpretation when I'm making art. 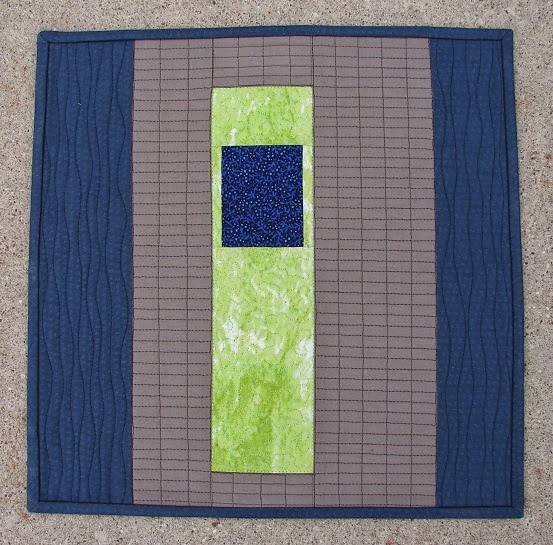 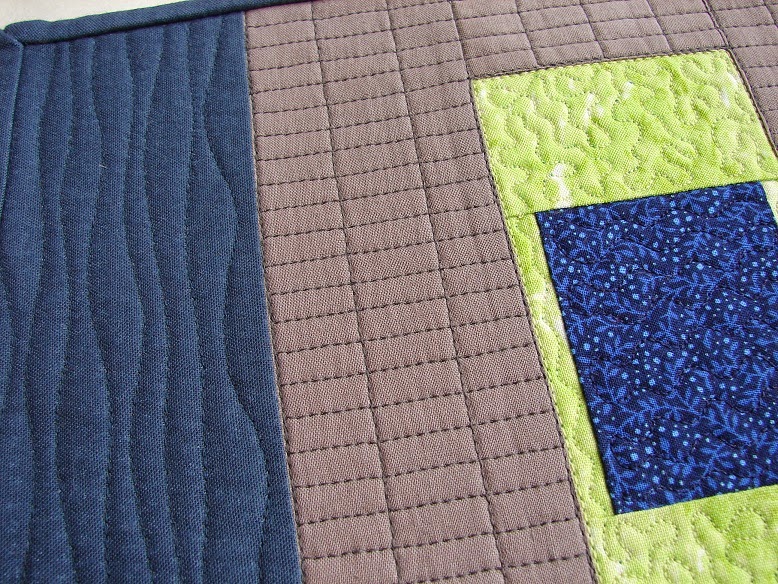 The quilting is wavy and more organic in the grassy and water areas and grid like in the city area.  The blocks in Manhattan are rectangles, so I tried to represent that in the quilting. 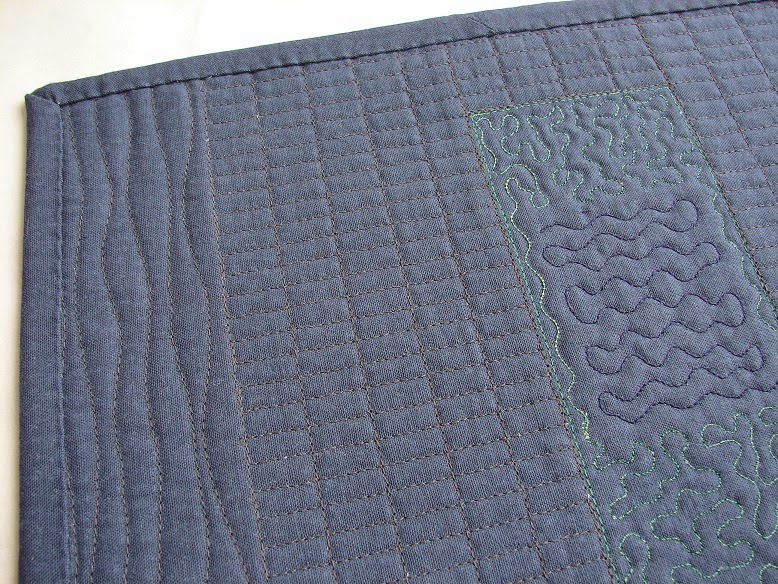 The blue of the rivers, backing and binding is the reverse of a printed fabric.  I wanted the navy of the fabric without the busyness of the print.  I actually tea dyed the pieces that I used for the city.  It was originally a grey that I wanted a bit more brown. 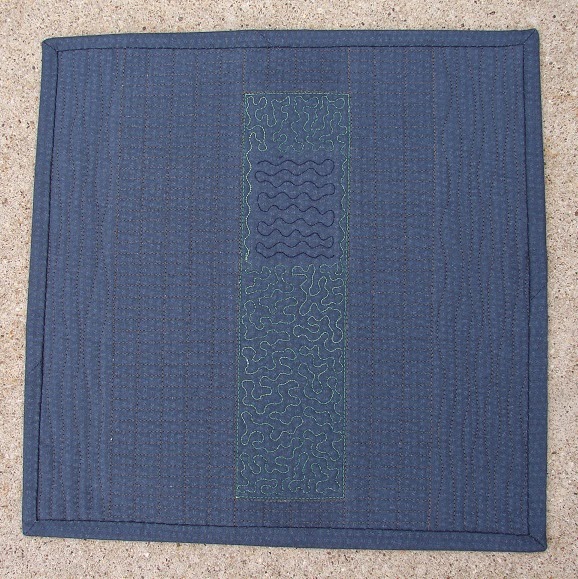 I used a piece of flannel for the batting, which is nice and thin and has a nice drape to it. 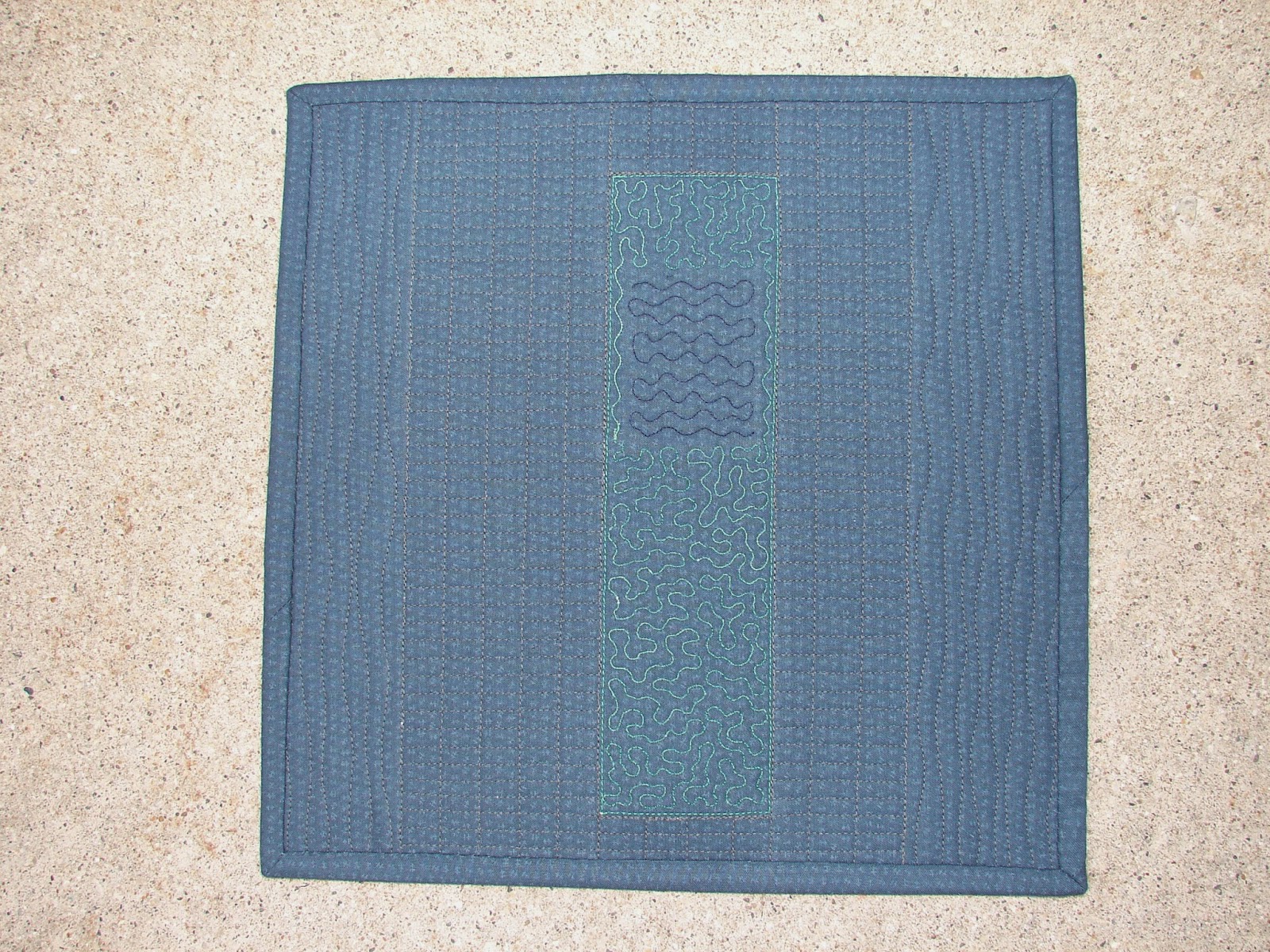 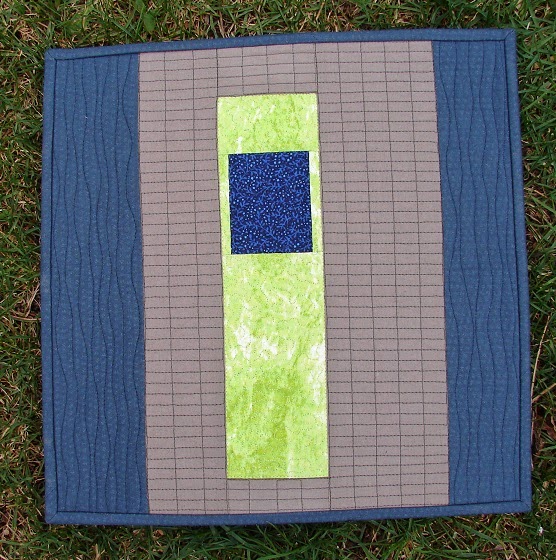 Now that you've taken the time to check out my little quilt, please go visit the other fabulous and creative women who are a part of this group:

Amanda  at whatthebobbin.com
Anne  at springleafstudios.com
Betty at a Flickr site: http://www.flickr.com/photos/toot2
Carla at lollyquiltz.blogspot.com
Elizabeth at opquilt.com
Leanne at shecanquilt.ca
Nancy at  patchworkbreeze.blogspot.com
Tomorrow I'll talk about how I arrived at this quilt and what I rejected along the way.
Linking with Crazy Mom Quilts

Rachel, how perfect! I just love the grid work and the different quilting designs you incorporated. Excellent!!!

Rachel your quilt turned out great. I love the simplicity and abstraction you brought to the design. Very nice quilting too. I find it so much easier to quilt these small pieces than bigger quilts. It offers a nice chance to play with new ideas. Well done.

Rachel, you just proved again that simple is better so much of the time! Great job on this theme!! I'm planning my first visit to NYC in the fall by the way! I'm sure we will go to the park.

This is terrific. It was a great foray into modernism, a complete departure from your charming map quilt (which I still am crazy about). But I love this one too! I think you really "got" the landmark aspect of this--that great big "lung" breathing in the middle of the city with water and greenery and bordered by tall buildings and then the rivers for the borders. And when I stood on the Rockefeller Building, I, too, saw the shape and outline of the park, which is so different from how it "feels" on the ground, with all its winding pathways, curved angles and trees.

I think it was brilliant to use the back of that blue fabric (and now I know why you were tea-dying the other day!), because the texture denotes the movement of water, and the quilting emphasized the long stretches of the Hudson/East rivers.

A great success! (And what were Plan A and Plan B? Dying to know. . .)
Elizabeth
opquilt.com

I love the back! Normally that back isn't so great but I love the quilting so much. Also, I could see a whole quilt made of those blocks, like you showed a mock-up of recently. ( I know I already said that on IG) I really think you should make a larger quilt though :)

I love this one, I love the bold graphics and the quilting is fantastic! I never thought of how rectangular the park would be but of course, it is defined by the city blocks, etc. This would make a lovely big quilt too.

Wow! All the other commenters did a fine job of summing up all the wonderful aspects of this little quilt. It is amazing. Even if a viewer knew nothing about its background, I believe they could interpret it as water,greenery, land.

Oh Rachel...I REALLY like this work of art! Your quilting is wonderful.

Well done! Love how it turned out.

Nice! I struggle to break away from literal interpretations too. Art quilts would really extend my comfort zone.