I am in the process of a really cool project and wanted to have it done today to show you, but: at 9:30 last night I realized that something I needed was out in the barn.  I wasn't about to head out there at 9:30, in the dark, in 20 degree weather, to look for it.  So, instead I will introduce you to two of our newest friends. 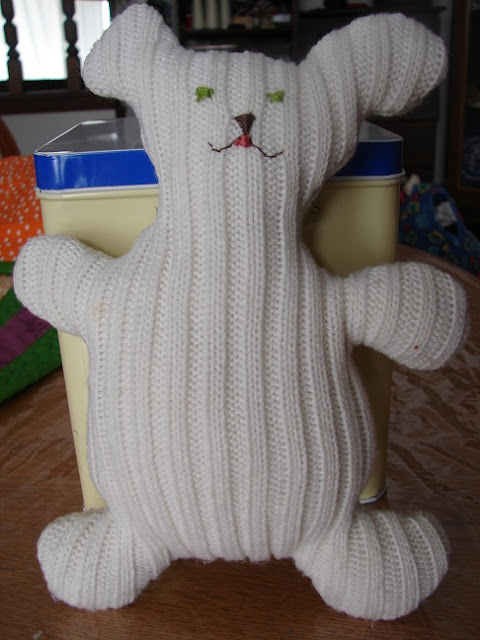 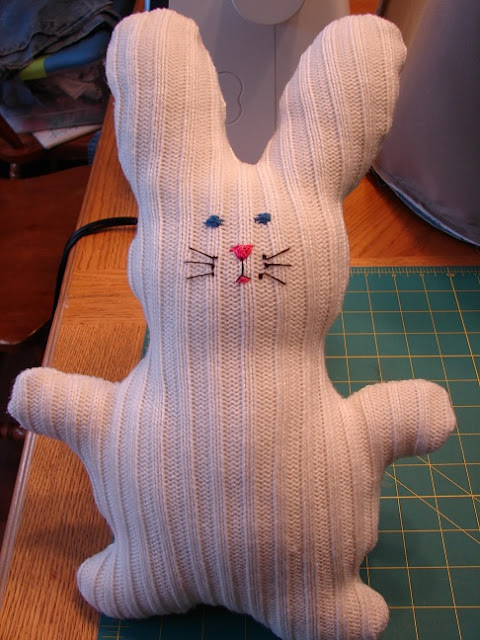 Lumpy Bunny.
This is for all of you who think everything I make is beautiful.  These guys, not so much.  I thought it would be great to make some 'sweater friends' out of a sweater that was destined for Good Will.  I made the bear/mouse one first.  Wes took one look at it and said 'Mickey(?). Mouse(?).' (He says most things like they are a question, right now).  And promptly took it and has slept with it everyday for two weeks.  This was even before I added a face.  He picked out the colors for the face.
Then I thought I would try bigger and maybe simpler with the bunny.  Well, he's just lumpy.  Ellie has claimed him, though.  Crooked face and all.  She says she loves him and that he smells like me.
Now Will is demanding a puppy.  I will have to find a new/old sweater to try again.
I still think this is a workable idea.  I have an old cashmere sweater that I would like to try.  I'm pretty sure its the ribbing on this one that makes them look so funny - oh and some bad sewing on my part!

Hee hee! These are so fun!

Are you kidding? I love them, lumpy and all! A great use for a soft sweater (your daughter's right... it WOULD smell like you, wouldn't a baby love that?!?) and way better than just getting rid of it. I'm totally doing this.
bugaboo, mini, mr & me

I love these, they are adorable and cuddly and I can see why your children have claimed them. This is an excellent idea in every way. Thanks for linking too!

these are precious...lumps and all.

Thanks for linking up to Creative Juice last week.

FYI: Creative Juice is on hiatus until the week of Valentine's Day because of The Beat the Winter Blues Party.

If you have any cool photo project you'd like to link up...stop by!

Thanks for linking up to Fantastic Friday. My daughter is begging me to make her one of these! ;)