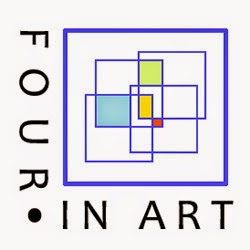 It's Four-In-Art reveal day!  So without further ado, here is my latest installment of Literature: Fairy Tales 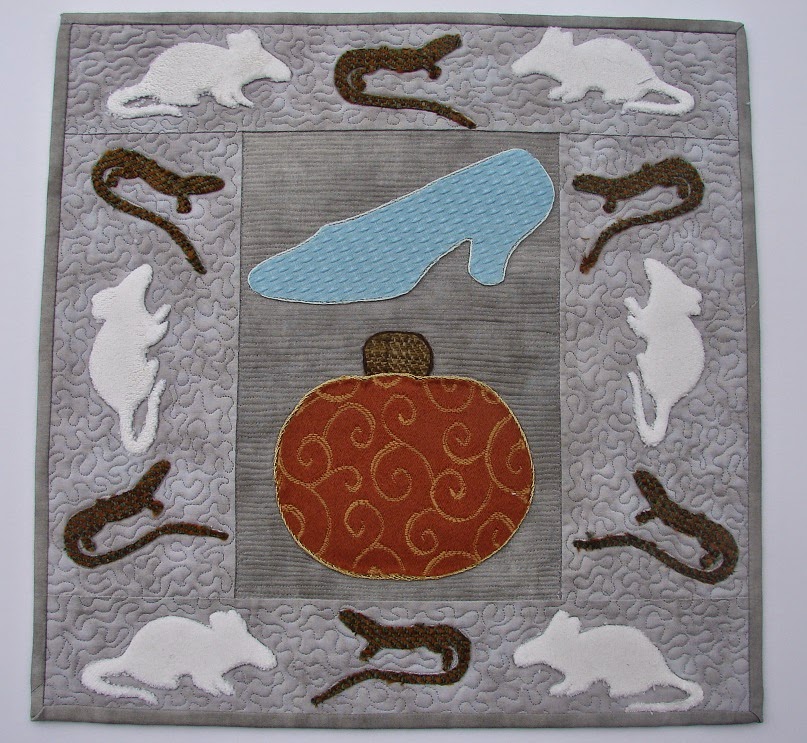 I'm sure you've gotten the reference to Cinderella with the glass slipper, mice and pumpkin.  Perhaps you are wondering about the lizards?  I read the French version of Cinderella, by Charles Perrault from this book: 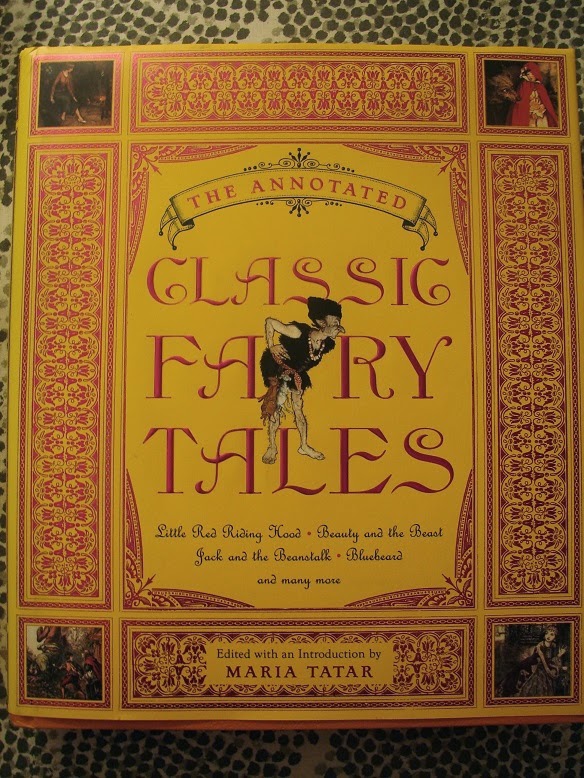 This particular version uses mice, rats, and lizards for the horses, coachmen, and footmen.  I even looked up what kind of lizards live in France so I could get the coloring right.  (can't help but be literal, even in my art) 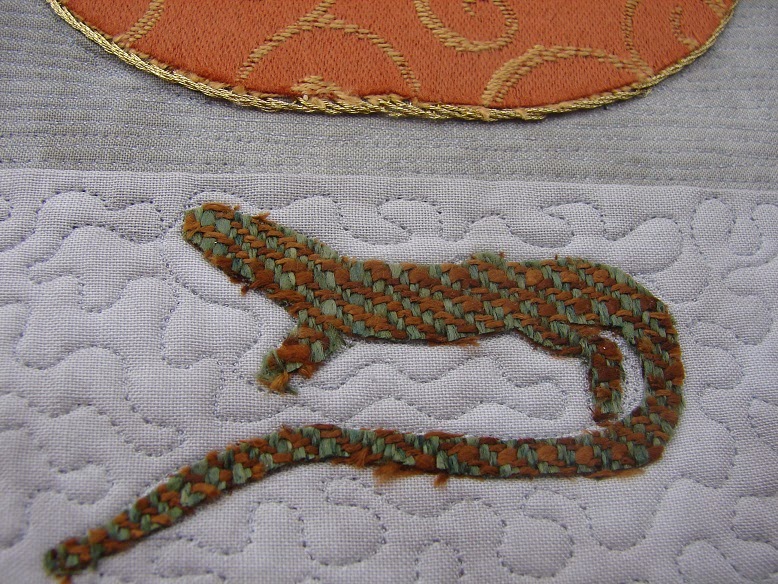 One of the notes says that every culture has a "Cinderella story" of rags to riches.   In this version she is originally called Cinder-tail for her habit of sitting in the ashes, but the nicer step-sister changes it to Cinder Ella.

The quilt itself:  As I was pulling fabrics for this little quilt, I remembered that a friend had given me two grocery bags full of upholstery samples and I thought that would be a good place to look for some of my fabrics.  I ended using samples for all the applique pieces. 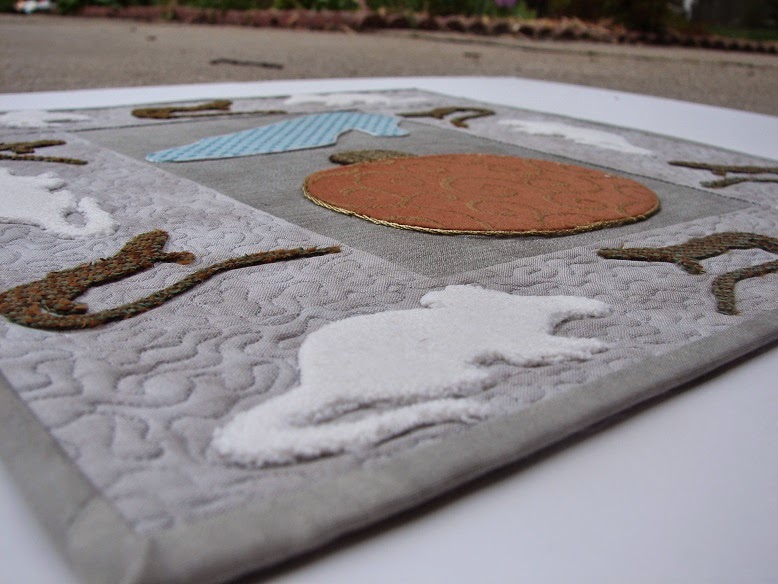 The mice are a fuzzy kind of plush fabric, the lizards and top of the pumpkin are a loose woven.  The pumpkin and shoe are both shiny and textured. The above shot should give you some idea of how the appliques stand up from the surface. 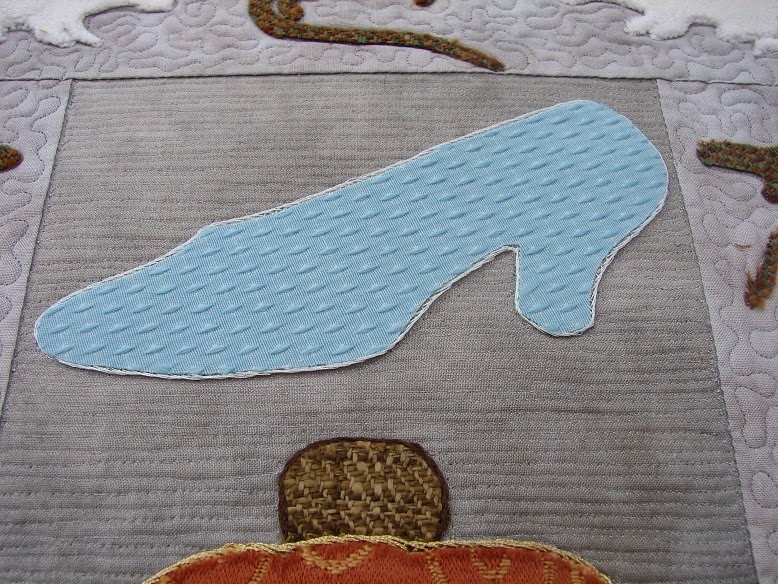 I did some stem stitch outlining of the pumpkin and the shoe.  Both with shiny threads.

My overall idea was to present the elements of the story so as to be recognizable without actually announcing the story.  I think I managed that.

Quilting was all done with Invisifil grey, a thin, shiny, polyester thread, with Aurifil in the bobbin. 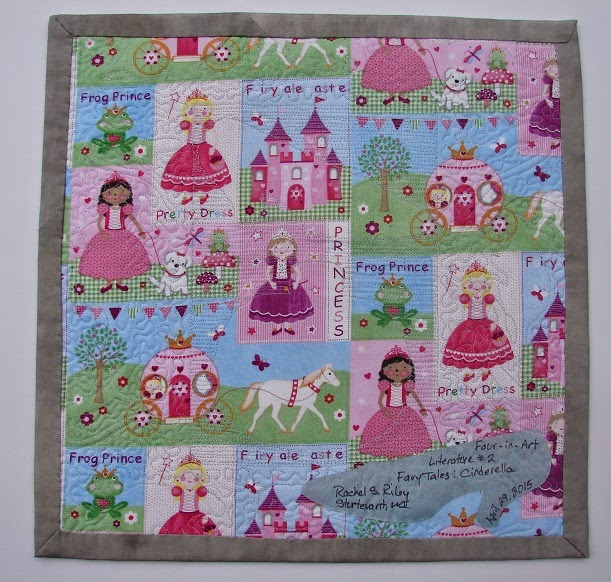 In a rare moment for me, I took the time to coordinate my backing with the overall quilt theme.  Although in this case, it is rather a contrast. No pinks on the front of my princess quilt.

The quilt finished up at 12" x 12", which is, of course, the idea.  I did a single fold binding so that the front could be nice and narrow and neat.

I do know I am my own worst critic, but I'll share some of my thoughts overall.
Things I like about this quilt:
-The texture of the various upholstery fabrics.
-The mice/lizard border
-The quilting of the center
-The subtle tones/colors of the whole piece. 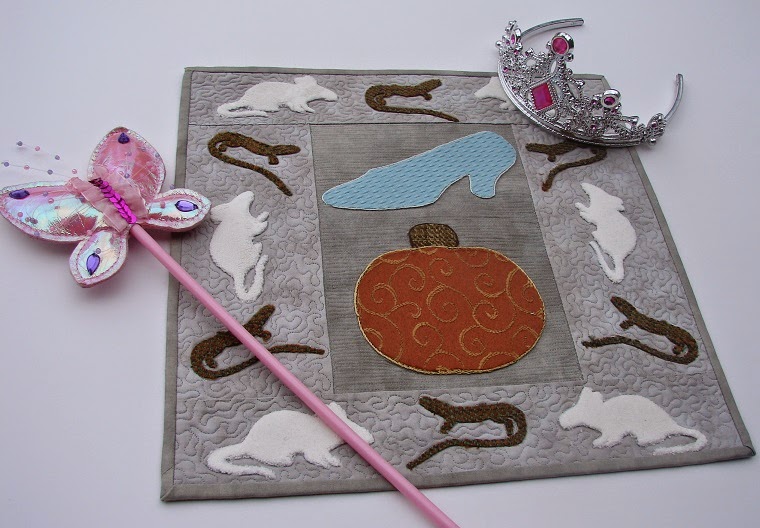 If I had another week to start over:
-I would make the center just the shoe. As I was quilting I realized the symbolism of the shoe, in that it is the only piece that stays as it is.  Everything else returns to its original state at midnight.  Therefore, the pumpkin should be moved to the border for a less prominent role.
-I don't really like the stipple/meander quilting on the borders.   I tend to fall back on that, because for me it is easy and fast, but I think that even straight line quilting in the opposite direction of the center might have been better.
-I would look for a different way of applying the pieces.  Right now they are simply glued/fused down with raw edges.  Not sure if that is a great long term solution.  Time will tell, I guess.

Please, take the time to check out the others who are also making quilts as a part of this Four-In-Art group.  I promise it will be worth it!  I will update the links as I can.

Oh, Rachel, I love everything about this one! And yes, it is understandable at first glance. Love all the applique and varying fabrics - a great touch (esp. on an art quilt). And I think the pumpkin gives it a nice balance, maybe if just for the color. You nailed it!

I'm with Betty on this one, although I did enjoy reading your self-critique (a good artist is always evaluating, right?). I love the representation of the lizards and mice around the borders, and while I see your point about the slipper, I love that pumpkin (using the upholstery fabrics was a brilliant move on your part!).

I am in a traveling threads bee and one of the members is doing a fairy tale theme. You can bet I'll be taking inspiration from you and your fine piece. I really like all the parts of this little art quilt--another success!

I love that this, like your first Literature quilt, is all about the texture. Your use of upholstery fabrics is inspired and I like the wavy quilting round the edge - it's a good contrast to the other textures. I understand what you're saying about the pumpkin but from a composition p.o.v it looks just right in the middle to me:-)

Aren't we all our best critics? Thanks for sharing your own thoughts about completing this project. I think your treatment of the mice and lizards in the borders helps give a regal feel to your mini quilt. Thanks for sharing more information about each of the fabrics that were chosen for your project. The texture of the tweed for the lizards helps to bring out the texture of real lizard skin. Looking forward to seeing your next project.

Rachel,
This is a very good interpretation. If you had not explained about the French version of the story, I would have wondered how the lizards fit in. I like the stippling in the borders; I can imagine the mice and lizards moving helter skelter in that border. The use of all the different fabrics (textures) was a great idea. And the backing is so applicable.