Oh, Yum.  I made the Butter Toffee recipe from Pioneer Woman's Blog.  Go and make this yourself!  It is not hard at all, and it is sooooooo (enough o's?) good! 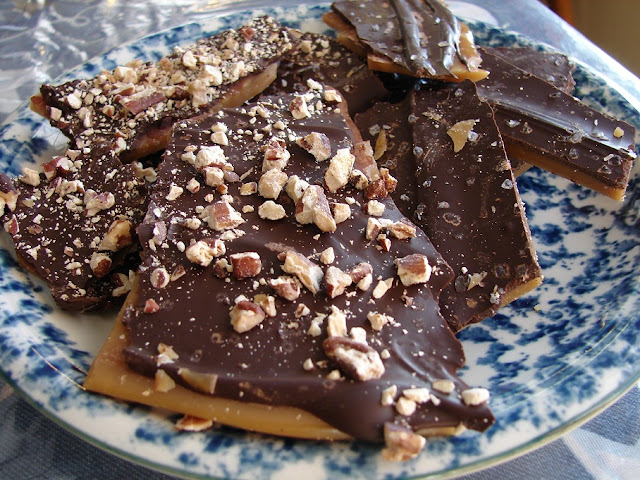 Notes from my own experience with the recipe.  Have at least two (maybe three) baking sheets ready to pour out the toffee.  I thought one was enough.  I was wrong.  I had to yell for Mr. Riley to come help me.  By the time we got the toffee spread on the two sheets, it was cooling fast and starting to look not so nice.  Fortunately you cover it with chocolate and it tastes fine.
I chose to use Pecans on one sheet and Sea Salt on the other.  If you use any nut, I would highly recommend toasting them in the oven.  Brings out the flavor so much better.  Really, you should do this anytime you are using nuts that won't be cooked later (in my opinion).

I only did the chocolate on one side (the recipe says to cover both sides).  I think they have plenty of good flavor mix between chocolate and toffee without the extra chocolate.  Also, I just used a mix of baking chocolates I had in the pantry: Baker's, Omahene, and Hershey's.  (not choc. chips, though) 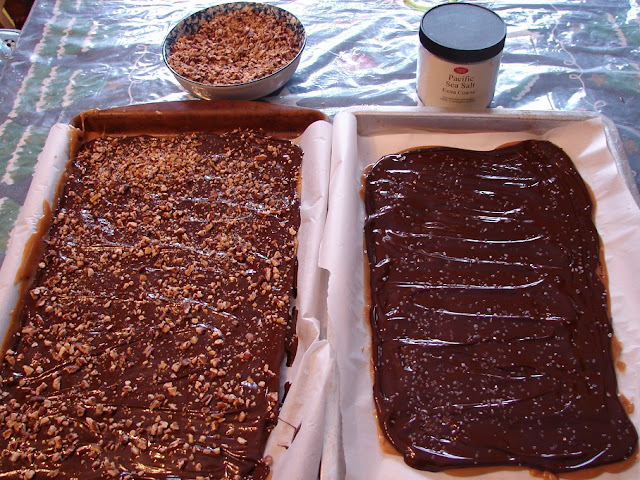 The Sea Salt version is definitely my favorite.  Mr. Riley likes the pecan.  In any case, I'm not sure the batch will last out the week.

Oh. My. Word. That looks SOOOOOOO (figured I'd jump on the train...) good!

We tried toffee once with someone else. She had us putting it in a glass dish. I wasn't sure any of us would survive it, but we did! The glass dish did, too...but it was touch-and-go for a while. I guess I learned from the experience at least.

Oh, Rachel, toffee is my favorite! Since I'm sure there won't be any left for Christmas, please eat some for me. I can enjoy vicariously!

This looks good, but I won't do that to my teeth - I'm old(er) and can't risk damaging them, but what a great gift they would make!

I meant to tell you that I love your header - I just love blueberries more than anything - I went blueberry picking twice last summer and I could eat them every day! Great photo!